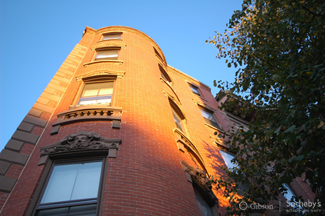 I recently sat down with Brian Perry, a real estate agent in Gibson Sotheby's South End office. He does a lot of work with developers and sellers interested in condos in the Boston area. We chatted about the state of the condo market in the South End, Back Bay and Boston in general.

Boston is one of the most unique metropolitan areas in the United States. Were an older city with a great selection of condos. Whether youre looking for upscale Boston luxury properties or older homes with antique charm, our city has it. Winston Churchhill once famously called Commonwealth Avenue in the Back Bay the most beautiful street in the world, speaking of course of all the beautiful Brownstones.

Like the rest of the country, Boston suffered during the recent real estate slump. Many potential sellers holding off on putting their homes on the market, for fear of low pricing. Many of these sellers opted to either wait until the market improved or opted to rent out their vacant condos.

But the market is recovering, Brian said during our chat. We are seeing promising signs. Since the first of the year we have seen some really good activity, particularly in the $700k - $1.3m range. I had several listings go under agreement in the last month.

These properties, Brian continued theyve been going under agreement very close to asking price. Weve also been in multiple offer situations, which is great.

Several local and national publications seem to agree with Brians assessment. The Boston Globe revealed in a recent story that the condo market in Boston is faring very well. Sales have increased by 3.8 percent and median selling prices rose by 5.4 percent over last year.

Sales in luxury buildings also jumped by an impressive 22.15 percent in 2010 compared with the previous year, according to Listing Information Network, a local company that tracks condo sales in downtown Boston.

There has also been a big uptick in developer activity. Brain told me as we discussed the topic. Condo projects that were once stalled seem to be coming back to life. We havent seen this in several years. Im not just talking about small 3 - 6 unit buildings, but 20 - 40 unit developments, too. A lot of these units have been selling pre-construction, too. This is a great sign for the coming spring market.

Our outlook for the coming year in Boston condos? Very positive, if recent trends continue. Were looking forward to a pretty good market; regardless of if youre looking for a luxury condo or an antique masterpiece.

Brian Perry can be found at brian-perry.com and on Twitter @BrianPerryRE. He serves Boston neighborhoods with over fifteen years of real estate experience.