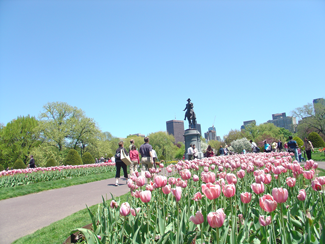 Spring in Boston's Back Bay

Spring is officially here. Boston is expected to receive some well deserved sunshine and warm weather this weekend, with the possibility of a couple of really nice days next week as well.It's hard to believe that it's only been a little over a week since Mother Nature pulled a practical joke on Boston this past April Fools' day.

The especially rough winter didn't exactly help out the Boston real estate market. In fact, a couple of recently releasedstudies suggest that snowy-gray Boston may have triggered a mini market rebound in vacation homes elsewhere. I know for a fact that around the third foot of snow I was thinking about a tropical vacation.

There has been some talk that the poor weather may have put off some buyers from entering the market, especially since many of the storms seemed to coincide with the end of the week, when open houses are traditionally held. Many buyers (especially first time homeowners) also typically like to hold out for warmer weather if possible to make their moving experience as painless as possible.

Gibson Sotheby's International Realty's own Frank Celeste was recently interviewed by the Boston Herald on just this topic. The Herald argues that now that spring is here, there's a lot of reason to be optimistic about the coming spring housing market.

"Buyers are feeling more secure," Frank told the Herald during their interview. ". . . [buyers] are making decisions much faster. If a property is priced right and in a great location, it's gone."

The data seems to back Frank up, who had one listing in Charlestown homes for sale go under agreement within three days of hitting the market.

Boston tends to experience a bump in home sales in the spring and fall. This is because many people hold off on putting their homes on the market until after the holidays (around February or March) or until after their vacations (early fall). This leads to an increase in inventory and sales around those times.

Due to the poor weather this winter, the spring market appears to have compressed the start of the spring market. Many sellers seem to have held back after the holidays due to the nearly weekly snowstorms we endured throughout much of January and February.

There are qualified buyers out there and they are placing offers throughout the Greater Boston area.Many potential buyers can still expect to find conventional 30 year fixed rate mortgages under five percent even though lenders are still behaving fairly conservatively, according to the Wall Street Journal.

Winter is finally over. Will the improving economy help out the real estate sector? Only time will tell, but the outlook is optimistic.