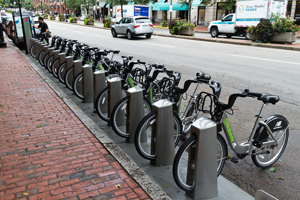 The launch of Hubways bike sharing service in July (which we covered here) has changed the way in which Bostonians and tourists alike travel around our city. Hubway arrived on the scene about four months ago and has made an immediate impact to such an extent that the company is already planning for expansion. This green way of travelling is a lot like the European style of bike sharing and brings a healthy and convenient way to quickly get to hotspot locations all throughout the city. These 60 stations are strategically placed for the benefit of the business person on their way to work or the casual sightseer on their way to Bostons South End for lunch.

With 600 bicycles and 140,000 trips embarked on in the past four months, its clear that this fun alternative to walking, taking the T or driving is catching on. As we head into the new year, Hubway is planning on adding an additional 30 stations of some 300 bicycles around the outskirts of the Greater Boston Area. Upcoming expansions include:

Receiving much support from Boston Mayor Tom Menino, Hubway has garnered the backing of New Balance as its primary sponsor, along with federal and state grants and other means of fundraising from Harvard and MIT, to name a few. This is clearly an exciting time for Massachusetts. The ascending 3,650 annual members only make up 45% of the bicycle trips made and the amount of memberships is bound to continue growing with the increased popularity. The abundance of bicycles and the recognition of these stations is spreading rapidly, we hope you come join the ride!