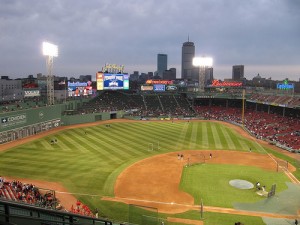 How thrilling would it be to be one of the 730 lucky students at the Boston Conservatory studying music less than a block away from historic Fenway Park! This idea may soon come to fruition as on January 17th of 2012, the Conservatory announced its $5.1 million purchase of a one-story warehouse located at 132 Ipswich Street.

Directly across from Jillian's, this large corner building is most notable for housing the Shrut & Asch Leather Company since 1982. A 70-year old business, owner Howard Shrut who owns the building through a family trust, has taken the initiative to now move his leather business to Woburn, Massachusetts. Shrut indicated that there has always been great interest in the property from developers with an array of ideas for the plot, including the Redsox who wished to expand their assets around Americas Most Beloved Ballpark.

One can see why this property was a prized possession to have, one that is zoned for up to eight-storys that would certainly be able to overlook the stadium if built. However, the Boston Conservatory has decided to either redevelop the whole site or put the existing building through a complete renovation. What is in the plans for the Conservatory is to have additional classroom and practice spaces due to their three expiring studio spaces in the city coming in 2016. There was the simple need for expansion from their current 12-building occupancy spread throughout the area. Also, there lies the possibility of adding housing for dorms for the students at the new Ipswich Street address, and what a way to live out your college years in a location like that!

Thus far, there have been no set dates or plans released as to what the Conservatory is going to officially do or when they plan on doing it. Regardless, this is absolutely an exciting announcement, and whatever should happen we are more than confident that the sites improvements will only enhance the Fenway area.