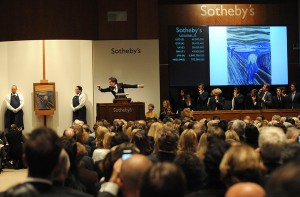 Can you imagine a world where the painting in your grand foyer is perhaps more expensive than the house itself? A world where many of lifes answers, strengths and soothing elements can be drawn from simply looking at an array of dancing strokes of paint? Well this might be the very case for one lucky and deep-pocketed individual who set a world record on May 2nd, 2012 for the purchase of a true iconic work of art.

Edvard Munchs world-famous The Scream painting has been seen by all, recreated by some and even has been the humorous depiction within movies and even Halloween. A painting created in 1895, the one that just sold is seen as the most precious and expensive out of the four versions Munch painted in his lifetime. A world-record setting sales price of $119.9 Million was received from an anonymous telephone bidder, who rightfully should keep his name out of the press! Bidding started at $40 Million and the anticipated sales price was estimated to be roughly $80 Million; a figure was undoubtedly soon blown out of the room.

It seems only fitting for such a famously perplexing piece of art that it once again defies the odds and becomes yet again unexpected with this value an individual put on it. It is still uncertain what the winning bidder wishes to do with the painting, but it is sure to be a hot topic for art enthusiasts and Munch followers around the world over the next few months.

As the painting was spun in from a rotating wall and proudly fronted by two men, it was only viewed for a mere twelve minutes upon which the final bid of the aforementioned $119.9 Million was accepted by the Sothebys auctioneer. Out of the four creations of The Scream, this one even includes a hand-painted frame where Munch wrote a poem with such excerpts describing the figure as shivering with anxiety and sensing the great scream in nature. The sheer shock and awe that must have engulfed this auction room was reportedly immense, as one can only imagine.

It must have felt as though onlookers were passed back through time, were in the presence of not only an inspiring, mysterious and revolutionary painting but were in front of an almost Godly, out of body presence. Now formerly owned by Norwegian businessman Petter Olsen, his father was actually a friend of Munchs. This momentous occasion will see the money Olsen has earned from this sale go towards funding a new art center, hotel and museum in the town of Hvitsten in Norway where his father and Edvard Munch lived one time as neighbors.

A piece as such is so special in that it can mean numerous things to any individual on any given day, moment or glance into the eyes of that ghostly-looking figure. That is what makes it so great and timeless. Art historians have long searched for its one true meaning and yet throughout the years the meaning truly is in the eye of the beholder, as it always should and will be. The same sense of an unknown aura is evident within the glancing stare of The Mona Lisa as well. It is only the painting of The Mona Lisa that is seen as potentially more valuable worldwide than this superior version of The Scream if it too came to auction for sale one day.

Maybe Petter Olsen would be able to interpret it best in his final interaction with the artwork as the owner. As he stared deeply into the painting for one of the last times before the sale, Olsen declared, For me, it shows the horrifying moment when man realizes his impact on nature and the irreversible changes that he has initiated, making the planet increasingly uninhabitable. An inkling as such that could possibly come from Munch back in the late 1800s is what makes it increasingly shocking if this vision about our damaging place and deepening footprint on the Earth was already a clear vision. This is inevitably foreshadowing to the core. Agree or disagree with Olsen, there is surely something to be learned from this statement. We can all draw a great deal of self-reflection when looking at this infamous piece of artwork, forever pondering in our own unique and private moments.

Please do not hesitate to look below for more details as well as the video of the sale of The Scream.