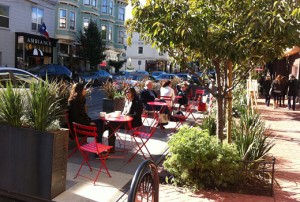 A lovely San Francisco Parklet, the Future for some Boston Parking Spaces

What does the beautiful city of San Francisco have in common with Boston? Among some possibilities, one truth is for certain; that they both will have parklets very soon. In San Francisco, thirty of these small outdoor spaces exist, ones where individuals have traded in their citys asphalt for patios with benches and beautiful planters. The group behind this movement back here on the East Coast is known as boston.PARKLETS. Moreover, they are hoping to open the first of these public spaces in Bostons South End neighborhood outside of The Wholy Grain Cafe in about a year already.

For the first location, just two parking spaces are enough to get the ball rolling and truly show how far such a small territory really can go towards providing more enjoyable, recreational spaces. New York as well has even installed the first of their public parklets in an effort to further promote public transit. In Boston, much of the same holds true as well as the desire is to push for more pedestrians to walk and use bicycles around the city. In a past blog we even mentioned just how successful walking and biking to work has become in Boston, which was even ranked number one for this combined category nationwide.

Mayor Thomas M. Menino perhaps termed it best when he recently proclaimed, The car is no longer king. This indeed is the blatant reality of Boston and many other densely populated locations across the country. While beginning this parklet journey in the South End, other Boston neighborhoods of Allston, Jamaica Plain and Mission Hill are where these parklets may soon come to life in the future as well. It still does remain to be seen how Bostonians will take to the notion of the parklets; especially when considering how valuable a parking space is to their everyday lives. Mind you, there are only 8,000 metered parking spaces to be found across all of the Hub, although so far there have mostly been proponents to the idea.

The planning director for the Boston Transportation Department, Vineet Gupta, informs us that they will be working closely with the neighboring public as well as with merchants in order to properly and appropriately locate where other parklets may soon reside. With the first one slated to open next Spring in 2013, each of the first parklets will be paid for by the city and are estimated to cost roughly $12,000 to construct. Thereafter however, nonprofits, businesses in the area and civic associations are hoped to continue the maintenance of the parklet in addition to being responsible for the supply of furniture and plants.

Regardless of these added fees mentioned above, the notion of more outdoor space is always a plus, especially in Boston where it is ever so popular. On many occasions, living in a city causes one to live without a car or sacrifice it at times when we would prefer its use. The hope is that by removing just two parking spaces (at least for now outside of The Wholy Grain), it will have a much greater positive impact on the morale of residents and visitors within the South End neighborhood and ultimately will make Boston an even more appealing sanctuary of a city than it already is today.