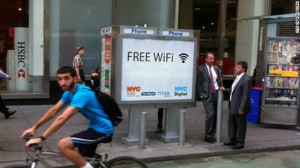 Can you imagine the public payphones spread throughout Boston providing free Wi-Fi for all to enjoy? This indeed may soon be the reality. The idea was generated by City Councilor At-Large Felix Arroyo who first heard of such a possibility from New York. It is here where the Big Apple has already implemented this technology on ten of their payphones. In essence, all individuals are now able to gain access to the Internet, their emails and more for up to three hundred feet of these Wi-Fi hotspots.

It is envisioned that a local business or neighborhood group would gladly support this idea by sponsoring it to thus provide the free service to the public. So how many payphones are there within the city of Boston? This data has yet to be released, however it must be noted that in the 1990s there were 2.2 million nationwide, whereas across the country today there are thought to be just 500,000.

Some important statistics from 2010 to be mindful of are the following from Arroyos fellow At-Large City Councilor in Boston, Ayanna Pressley:

It remains to be seen whether this movement gathers much steam or if it is even practical for Boston and its current payphone locations. As of now, the order has been received by the Committee on City, Neighborhood Services & Veterans Affairs and a later hearing is expected to occur in the near future.