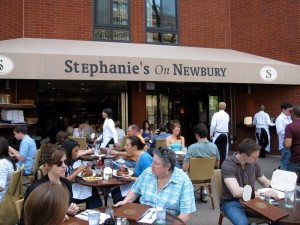 The Famous and Incredibly Popular, Stephanie's on Newbury

South Boston or Southie residents soon will be graced by the presence of a Stephanies restaurant right in their neighborhood. The fine-dining establishment, most notably famous for its main Newbury Street location, appropriately named Stephanies on Newbury, also has a sister restaurant that was later opened in the South End on Tremont Street, known as Stephis on Tremont. The swanky eatery will now bring its classy service and neighborhood restaurant feel to 11 West Broadway in the hip South Boston area for a hopeful grand opening date of April of 2013.

It is something that owner, Stephanie Sidell Sokolove is incredibly excited about, We really were looking for a densely populated area with a lot of foot-traffic and that corner is really appealing. A mixed-use development constructed by Ron Simmons is where this restaurant will be. In the former location of the Quiet Man Pub, this new development facility will be six-stories tall with fifty residential units, twenty-six parking spaces, four commercial spaces and all within 95,000 square feet. This alone is enough to excite this portion of the city of Boston.

It isnt just Stephanies who is enthusiastic about the move of course, these same sentiments are also reflected by Bill Gleason, the President of the West Broadway Neighborhood Association. Mr. Gleason knows how much this restaurant will have a positive impact on the area and turn it into a destination for visitors more so than ever before, Stephanie's is what we are looking for, we're hungry to see retail. It will start to fill in that strip and make it a dining destination." For a restaurant in the South End that is right across the street from our 556 Tremont Location, to the other Stephanies on Newbury Street that is a block away from our 277 Dartmouth Street Back Bay office, Stephanies is a restaurant business that we at Gibson Sothebys International Realty greatly enjoy and support. We thus congratulate them on this new venture and look forward to dining with them in South Boston very soon!