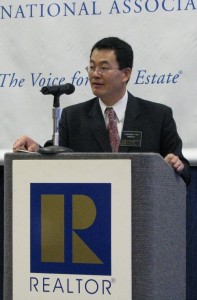 Lawrence Yun, Chief Economist at the National Association of Realtors

August of 2012 proved to yet again be a formidable one across the United States as both pending home sales and average home prices were up. It was only a few days ago when in our blog we reported that for Massachusetts in particular, the median price for a single-family home in August of 2012 increased from August of 2011 by 1.6% up to $310,000. The nation showed a much better improvement by a staggering 9% although home prices were far less than the Bay States at just $187,400.

Showing just how strong August was, even when compared to July of 2012 home sales across the country were up by 8% and this is something that the Chief Economist at NAR, Lawrence Yun has taken notice of. More buyers are taking advantage of excellent housing affordability conditions. Inventories in many parts of the country are broadly balanced, favoring neither sellers nor buyers. There are far more normal sales as opposed to distressed property sales that have been more frequent in recent years. This, as well as appreciation and an increase in repeat sales have all indeed also been strong influences on the climbing of home prices upon a sale.

To view Yuns press conference about Augusts 2012 sales numbers, it is highly encouraged that you view the link at the base of this post.