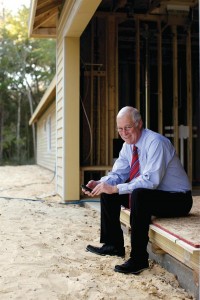 Barry Rutenberg, Chairman of the National Association of Home Builders

While sales of traditional homes have gone up of late, sales of brand new homes have far and away excelled. Many of our recent blog posts relate very well to this topic. It was just in June when it was shared that housing starts were up in June, probably showing why these sales of new homes in August have done so well. Also in June, the construction industry as a whole realized its third straight increasing month in total spending. Here in Massachusetts, we learned that single-family home sales were up 20% in August while across the country there was an increase in median prices as well by 9% in August of 2012 compared to the prior year, now up to $187,400.

Comparatively, new homes across the nation showed a large 11.2% increase in their median prices in August over July, now to $256,000. This, the highest improvement since March of 2007 is an astounding accomplishment and shows that a strong turnaround in the Real Estate market is certainly on its way if it is not already here. These results from August also are an even more impressive 17% increase over August of 2011s numbers for the sold prices of new homes.

New homes that were sold for $400,000 or more saw a boost as well leaving experts to draw some interesting conclusions. David Crowe, the Chief Economist at the National Association of Home Builders, noted that, This reflects the fact that people who are able to buy homes right now are those in higher-income ranges who have cash and equity on hand, while first-time buyers are having a tougher time getting qualified for a mortgage." This has all occurred with the inventory of homes still remaining at record low levels.

Looking to the different regions throughout the country, here in the Northeast there has been the most significant ascending of new home sales by a lofty 20%. The Midwest saw an increase of 1.8%, the West went up by 0.9%, however they declined in the South by 4.9% in August. Barry Rutenberg, the NAHB Chairman, also was quoted with some insight by reacting to these numbers, New-home sales in August effectively tied the pace they set in the previous month, when they were the strongest we've seen in more than two years so this is really a continuation of the good news we've been getting on the housing front. Looking at the big picture, sales have been trending gradually upward since the middle of last year as favorable interest rates and prices have driven more consumers to get back in the market for a newly built home." Need more proof that now is a good time to enter the market, especially here in our Massachusetts region of the flourishing Northeast?