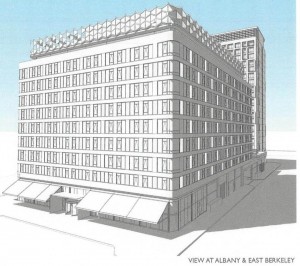 The Future Development Looking From Albany and East Berkeley Streets

275 Albany Street is a prime location where New Jersey based developers, Normandy Real Estate Partners, have decided to build a hotel along with a reported 19-story residential tower. This property, currently a parking lot, can be found between Traveler and East Berkeley Streets. Originally touted to have two hotels, the lack of support for such an idea led Normandy to the conclusion that they will build an apartment building in its place along with the single hotel, both of which will have classy restaurants and first-class stores on the ground levels.

These details are derived from what we already reported in a past blog discussing what we were aware of back in March of this year. However, times have certainly changed and more details have thus been released. According to Gibson Sothebys International Realtys own Matthew Gaskill and Alisa Peterson, the hotel will consist of 325 rooms while there will also be 220 apartment units in the second building with an above-ground parking garage in between the buildings large enough to house 165 vehicles. This alone indeed is something that Boston will greatly benefit from as parking availability continues to become an increasingly valuable commodity.

All indications point to the hotel, still yet to be named or determined, as being a more affordable option for Bostons visitors as it has been mentioned that it will be, ...a low cost alternative to current hotels. Despite this, it nonetheless will be tastefully done and will provide guests with the exemplary service that they have become accustom to in Boston. As a new imprint in Bostons beautiful South End neighborhood, these developments will undoubtedly produce far more jobs, bring a new attraction to the city and also a renewed sense of vibrant life to the area that currently is admittedly in need of a refreshing image.