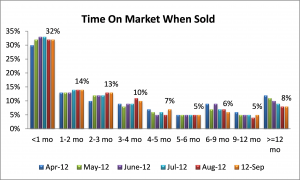 The lack of inventory in the Real Estate market has certainly caused one thing in areas where demand remains high. This one thing, as it turns out, has been properties essentially flying off the market at rates that are not commonplace; especially when coming off of an economic recession. In a past blog from not too long ago we reported that the average days on the market is now at 69 days which is down 30% from where it stood in 2011 at an average of 98 days.

The latest Realtors Confidence Index from the National Association of Realtors informed us that out of all properties on the market throughout 2012, the past six months (through September) in particular have seen 32% of all listings come to closing within the first month of being on the market. At a broader glance it is understood that an equally as impressive 59% of all homes are sold within the first 90 days of being available for sale.

Thinking that some listings still stay on the market for a great deal of time? This may still be present in certain areas or under specific pricing circumstances, however on a National scale the proportion of such extended periods of time being available for sale are less frequent. Moreover, this has been such a strong trend that properties that were sold after being on the market for six months or more fell to 19% in 2012 from 2011 when 28% of the market was sold at least after a six month period. This is a positive sign that spending in the marketplace is on the up. This rediscovered faith in the housing industry will also prove vital in continuing to aid the economy as a whole in its very own recovery. Turning the attention solely on Real Estate, these aforementioned figures will give Realtors and those homeowners pondering whether to put their property up for sale the added confidence knowing that the status quo of today is that buyers are plentiful.