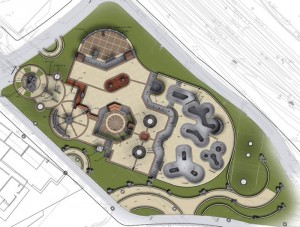 The Future Layout of the Skate-Park

A 40,000 square footskate-parkis roughly 50% complete in terms of its extensive planning which has dated back eleven years when fundraising started when the project was initially envisioned. The location of this future superb facility will be in East Cambridge along the Charles River and will be under the Zakim Bridge. The Department of Conservation and Recreation in coordination with the Charles River Conservatory have construction set to kick off this coming Spring of 2013 with the expected completion date estimated to be in the Fall of the same year.

So far, $2.5 Million has been raised for sure a groundbreaking initiative, one that will once completed, will be a safe and welcoming place for individuals to be and practice their skills with one another. The parks incredibly efficient and easy accessibility from Charlestown, Bostons Downtown and Cambridge will be improved by pedestrian bridges, including the North Bank Bridge connecting Revere Park in Charlestown. In addition, the developers are going to increase the Green aspect of the park by adding more planters and grass run-offs to allow for better drainage all while not hindering the overall flow of the park.

We recently blogged about this topic back in March of this year when even more progress had been made and was ready to be released. The four tiers of the park will now even be accessible for those in wheelchairs and not just for spectating purposes. Those in wheelchairs will actually be able to partake in all of the fun and that truly is a wonderful thing. The next meeting of all the necessary officials is set for mid January when the developers are set to release the plans at a 75% completion. It will not be long before yet another great attraction graces our Greater Boston Area and it will undoubtedly be something that both locals and visitors alike will enjoy for years to come.