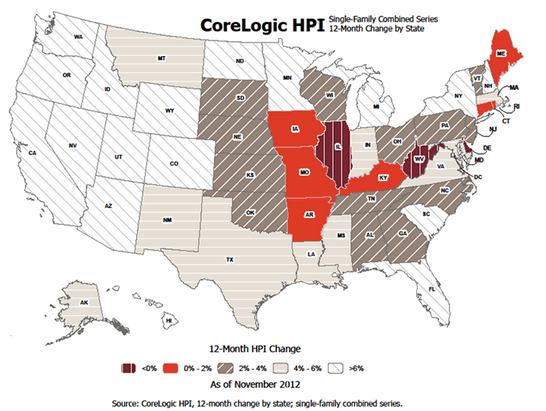 CoreLogic's Home Price Index (HPI) Graph for the past 12 Months

Not since May of 2006 has the United States as a whole experienced such a triumphant boost in Nationwide home prices. The most recent data released yesterday by CoreLogic reveals that November of 2012 had home prices (including distressed sales) climb 7.4% year-over-year compared to November of 2011s numbers.

What has come to fruition is that November goes down as the ninth consecutive month where these year-over-year price gains have occurred. With distressed sales excluded from the equation, home prices increased by 6.7% in November of 2012 over November, 2011. The President and CEO of CoreLogic, Anand Nallathambi, shared some interesting feedback on these findings, "For the first time in almost six years, most U.S. markets experienced sustained increases in home prices in 2012. We still have a long way to go to return to 2005-2006 levels, but all signals currently point to a progressive stabilization of the housing market and the positive trend in home price appreciation to continue into 2013."

Once Decembers final numbers are reported, even more of a drastic betterment in the figures is expected. When including distressed sales, a 7.9% gain in year-over-year statistics for December of 2012 is anticipated by the CoreLogic Pending HPI. Mark Fleming, the Chief Economist at CoreLogic stated, "As we close out 2012 the pending index suggests prices will remain strong. Given that the recently released Qualified Mortgage rules issued by the Consumer Financial Protection Bureau are not expected to significantly restrict credit availability relative to today, the gains made in 2012 will likely be sustained into 2013." Even more optimistic are the predictions when distressed sales are eliminated from the equation, where an 8.4% rise in Nationwide housing prices in December of 2012 over December, 2011 are due to be released soon.

Please also have a look at the above graph. It details CoreLogic's Home Price Index (HPI) over the past twelve months and from this we can see Massachusetts improved 4-6%.