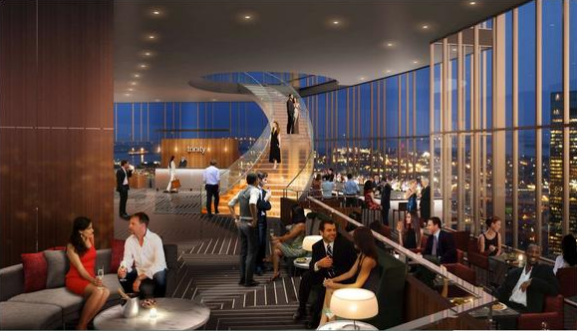 The Sky Lobby at 40 Trinity Place

In the not so distant future, the Back Bay neighborhood of Boston could soon see an exceptional new fixture grace the Boston skyline. Located at the corner of Stuart and Clarendon Streets near the border of the Back Bay and South End, this potential development is to be named 40 Trinity Place. The renowned hoteliers Gary and Jeffrey Saunders are behind the project along with developer Jordan Warshaw. These three men have enthusiastically envisioned a 33-story glass tower which will have mixed-use purposes.

Some 227 top notch hotel rooms, 115 luxury condominiums and 3 tasteful restaurants are proposed to be within this building to be located on the same site as the Boston Common Hotel & Conference Center, in addition to a section adjacent to the University Club of Boston. Jeff Saunders, the President of the Saunders Hotel Group, came forward to comment that, We spent over a year traveling the country and beyond, visiting four- and five-star hotels of all shapes and sizes. We arrived at a vision of what would be perfect for a new hotel-residential building on the edge of the Back Bay and South End.

Mayor Thomas M. Menino, who has seen quite the impressive array of proposals come across his desk as of late for spectacular projects spread throughout all of Boston, is thoroughly impressed with these plans. Menino most recently spoke on the matter by saying, Right now, its a proposal that will go through the neighborhood process, but something has to be done with the existing building. I like the design, the design is very nice, but we have to make sure that the community and the Boston Redevelopment Authority accept the proposal.

Just last week the development team submitted their Draft Project Impact Report to the Boston Redevelopment Authority. This filing addresses all hesitations about the project that planners and activists initially have had about this tower being directly across the street from the John Hancock Tower. Some plan alterations have been made as of late with the amount of condominiums being reduced by 27 to the total 115 number mentioned above. One fascinating feature of the project will be that the lobby of the hotel will actually be located on the top floor to allow for panoramic views of the city in addition to a three-season roof deck off of it for all to enjoy. It was only two years ago when the team tasked with this project purchased the property for $22.6 Million from the John Hancock Life Insurance Company. Ultimately, the expectation is that after the expected approval has been granted, construction should commence before the end of 2013; a very exciting proposition for the city indeed.