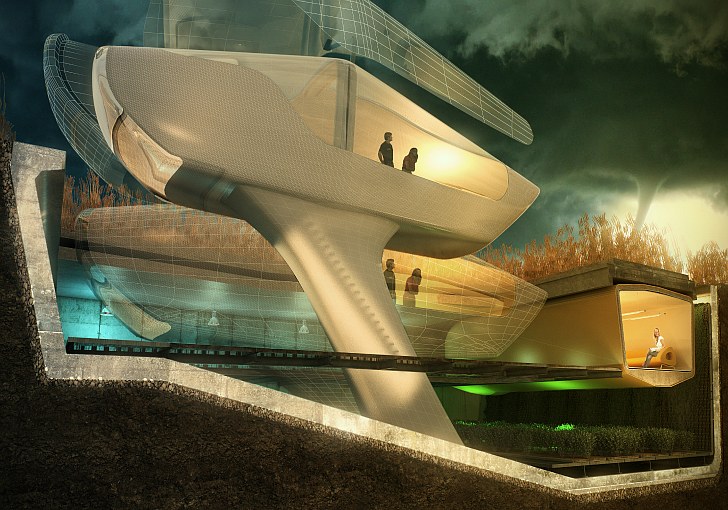 What has been a terrible problem for much of the country, especially in the Midwest, is the issue of tornado's and their threat to not only our homes but our lives. With these super storms literally tearing apart neighborhoods, farms and more for centuries, it is rather perplexing that special measures have not taken place to design homes that are better suited to withstand these ferocious storms; until now.

A Hong-Kong-based architectural firm known as 10 Design has been actively perfecting the ultimate tornado proof house which could become available for sale in the next two years. Utilizing the latest in hydraulics, solar power, and a high performance shell, these homes are able to be lowered into the ground when danger strikes and a storm is approaching. Initially targeted for the tornado zones in the Midwest area of the United States, this suburban neighborhood concept is also envisioned to enter the Philippines and Malibu markets where there are threats of typhoons and fires, respectively. Already specific locations of Nebraska and South Carolina have been secured to test the first prototypes once they have been completed.

Ted Givens, a design partner at 10 Design was reached for comment and was quoted as saying, "I believe there's a responsibility among architects to design buildings that are aware of their own natural surroundings. There's nothing accidental about these storms they're going to come and the buildings should be responsive." Part of the inspiration with the design and functionality of the project for these homes came from the kinetic motion used in portable campers, sailboat hulls, and garage doors interestingly enough. Once the home is secured beneath the ground by the hydraulic levers, it is sealed tight by a concrete roof which eliminates any possibility of wind, fire or water entering. Furthermore, the sensory data in the home can sense when storms are approaching and also have the ability to communicate and warn other homes in the area.

Givens went on to state that, "They will cost a bit more, but if you look at the replacement value of a house and lives [saved], it will be well worth it. Thus far estimations as to the price of these homes is around $300,000, although Givens admits this may drop once the design is further simplified and as more are built. The engineering firm Buro-Happold is in negotiations with 10 Design to partner up on the project. Together, they look to build these homes which will all be roughly 900 square feet in size with 400 additional square feet being found underground for storage space and gardens. It is not just 10 Design who is trying to develop a prototype to protect against storms, as Givens furthered his discussion by saying, "There's one Chinese manufacturer that's actually built a few prototypes of his own. He's doing these steel boxes so we're trying to hybridize that into something together. It's still a fluid process of developing the design and then trying to secure the funding, but there are a lot of entrepreneurs out there that are quite interested."

It is still up in the air as to when these homes will truly be in production for the greater population and if they will even be living spaces that the public will want to live in. Regardless, it is a wonderful realization that firms are now able to use todays improving technology to take advantage of a concept as such which has been envisioned for decades. A shelter that provides a luxurious lifestyle that can save ones home, valuable possessions and even their life; now that sounds like a concept for the future that is destined to succeed.