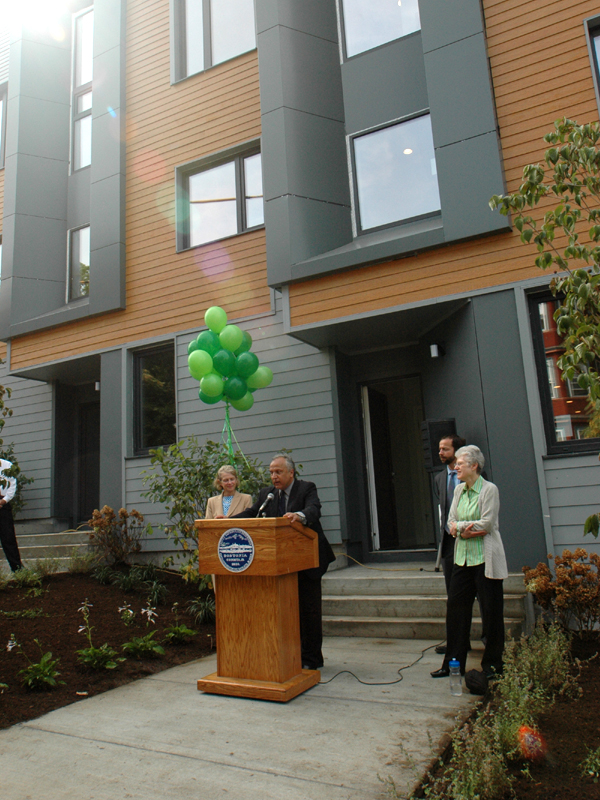 We are proud to announce that just yesterday there was a ceremonial ribbon cutting hosted by Urbanica Inc. at 226-232 Highland Street in Roxburys Fort Hill. Many high ranking city officials and those deeply invested in the Greenovate Boston movement were in attendance. Gibson Sothebys International Realty have been incredibly proud to represent such a groundbreaking initiative which has been successfully marketed by our own Brian Perry.

Known as the E+ Homes Development, the Fort Hill Project, or the Urbanica Project, this new endeavor is the first of its kind in The Greater Boston Area where homes will actually produce more energy than they consume. Urbanica Inc. is headed by its President, Mr. Kamran Zahedi, a graduate of MIT with a degree in Architecture and Civil Engineering who has worked extensively in the field and has been heavily invested in over a dozen development projects over the past thirty years. According to Urbanica, Mr. Zahedi can best be described as one who is, Driven by a passion for reimagining a new future for urban living, a penchant for progressive design and a respect for existing context, Kamran has created a niche for transforming and revitalizing living, working and playing spaces in Boston and inspires his team to bring something entirely new to the table.

Mayor Thomas M. Meninos E+ Green Building Program is an initiative of the City of Boston and a partnership of the Department of Neighborhood Development (DND) and the Boston Redevelopment Authority (BRA).