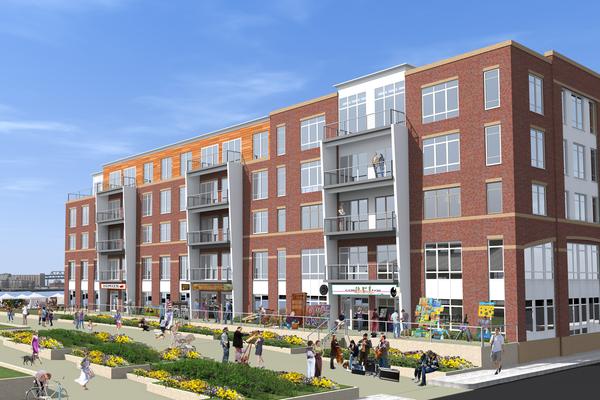 A rendering of Boston East, an $87 million luxury apartment project on the East Boston waterfront

With a great deal of development occurring all throughout Downtown Boston, the Seaport District, Waterfront, Back Bay, South End, Cambridge and more, one of the next hot spots is undoubtedly East Boston. A place that is touted to create big buzz for the future of Boston real estate, East Boston, sometimes referred to as Eastie, is a location with immense potential where some fantastic deals can be had today. One area in particular where this takeoff is expected to occur is the waterfront portion of East Boston.

Two large residential projects are already in the pipeline with one having started construction. 'Portside at Pier One' is a $67 Million luxury is an apartment complex backed by the developers out of New Jersey known as Roseland Property Co. This endeavor commenced construction just over the past year. Furthermore, 'Boston East' is another initiative at East Bostons waterfront will see a $87 Million project encompassing two hundred apartments along Border Street to be built. This second development is slated to gain its permit from the State of Massachusetts by December. The positivity does not end there in East Boston as Trinity Financial are now closing in on the purchase of a 7.5 acre former marine rail and shipyard for $2 Million with plans to develop in the near future.

Trinity Financials Project Manager, Abby Goldenfarb, came forward to comment on this purchase and East Bostons noticeable strides in real estate and development as of late by stating, East Boston is the next frontier in the city of Boston for development. A combination of Roselands project and the market coming back created the perfect timing for us. The question is whether we can create a project that will attracts those rents. We think we can, we just need to convince investors.

The rents being sought for East Bostons new developments is anywhere from $3-$3.50 per square foot. Figures like this have yet to be achieved in Eastie, as this would translate to roughly $2,800/month. With the market upwardly trending as it is throughout Greater Boston and the broader United States in this economic and housing rebound, it seems inevitable that prices both for the purchase and leasing of real estate are due to continue rising. For East Boston, this optimism will only attract further investment and development in the area going forward. As a result, the job and real estate markets in East Boston will thrive, with local businesses experiencing a new level of prosperity previously unbeknownst to them.