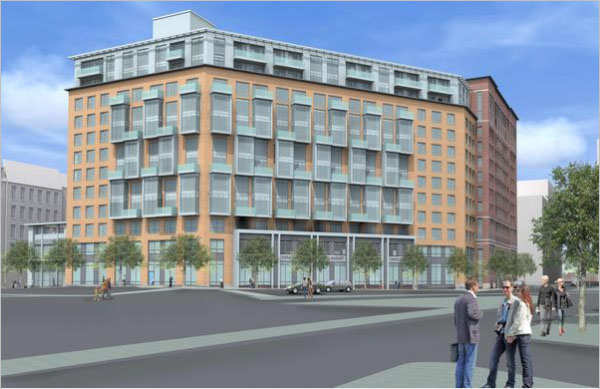 310 Apartments are soon to be built at One Canal Street

The word of new projects soon to rise above Boston have not stopped as further faith in the future of Boston is clearly evident among developers. The latest breakthrough comes along the Rose Fitzgerald Kennedy Greenway in Boston where developers Trinity Financial and Aimco have pushed forward with their plans for a $190 Million apartment tower.

To be known as One Canal Street, this proposal calls for 435,000 square feet rising up twelve storys. Near Bostons TD Garden, home of both the Celtics and Bruins, this initiative will add 310 apartments to the area and bring an additional and very much needed 147 parking spaces. Retail portions will call the ground floor of One Canal Street home with the possibility of a supermarket moving in.

Trinity Financial and Aimco, a firm based in Denver, just signed a 99 year lease for the 1.5 acre lot with the Massachusetts Department of Transportation. The business will make a single, upfront of $13 Million, and will be the ones tasked with building the tower, while Aimco will own and operate the building after its expected grand opening in 2016.

A $114 Million construction loan will help fund the project. Recently, the project has been on hold due to MassDOT and Mayor Thomas M. Menino requiring that a supermarket be included in the development. This issue has reached a resolution with a the firm now only able to market the 20,000 square feet of retail space exclusively for supermarket use to join One Canal Street at its ground floor. However, if another supermarket opens in the next eighteen months in the area, One Canal Street will be able to allow any type of retail firm to occupy the space. Regardless, the notion that a supermarket will undoubtedly open in this portion of Boston is a welcomed sign for residents as the recent loss of the nearby Stop & Shop will no longer be as much of a lifestyle tragedy. Construction on this stunning complex is anticipated to commence in the coming months.