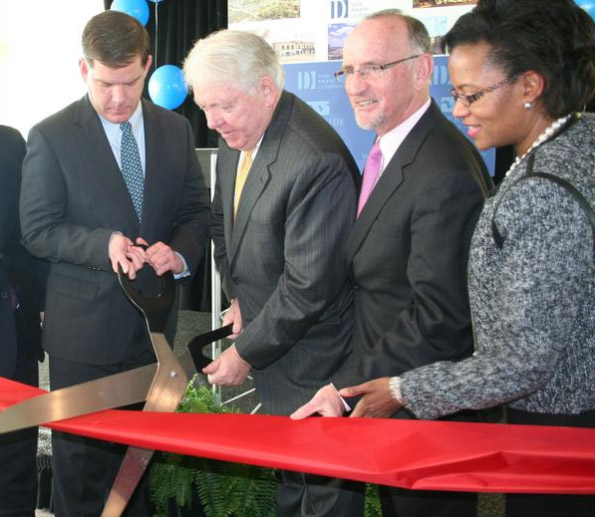 Were going to have to get used to news like this. Yesterday marked the grand opening of a beautiful tower in Bostons Seaport District known as Waterside Place. With so much development currently underway in this bustling area of the Hub, and still so much that is waiting to break ground, the next few years will see countless ribbon cutting ceremonies take place.

Waterside Place, a 236-unit luxury apartment building, is located on Congress Street and has upwards of 350,000 square feet on roughly three acres at the intersection of Summer Street, D Street, and the aforementioned Congress Street. On hand yesterday was Mayor Walsh, a former construction worker who many years ago was formerly employed to help build the beginning of the transformation in the Seaport District that we are now beginning to realize.

The Mayor praised the developer, John Drew, who believed in the potential of the Seaport District many years ago, even when it was nothing more than a rail yard. Mayor Walsh reminisced about his early experiences in the Seaport yesterday by sharing that, I was bent over for eight straight hours, recalled Walsh, who said his father dropped him off on one job at 7 a.m. every morning and his primary task was to remove Styrofoam to allow concrete to be poured. When I got home, I couldnt move and learned quickly that while I wanted to be a laborer, my vision was to do something else.

Already 8% of the units at Waterside Place have been leased, representing 20 of the units. As a luxury building, the rents that are being achieved here are comparable to many other luxury projects in the area and in Downtown Boston including 315 on A, the Kensington, and The Victor. On average, Waterside Place is seeing rents for a 486 square foot one-bedroom unit rent from $2,775/month and upwards. For a two-bedroom, units of 1,329 square feet are achieving $4,082/month, while the three bedrooms of 1,329 square feet are starting at $5,690/month. The life of luxury has undoubtedly found its way to Bostons Seaport District. As the months go by, the area will only continue to grow taller both in scale and reputation as further investment and maturity of the landscape help redefine this hotspot in the Hub.