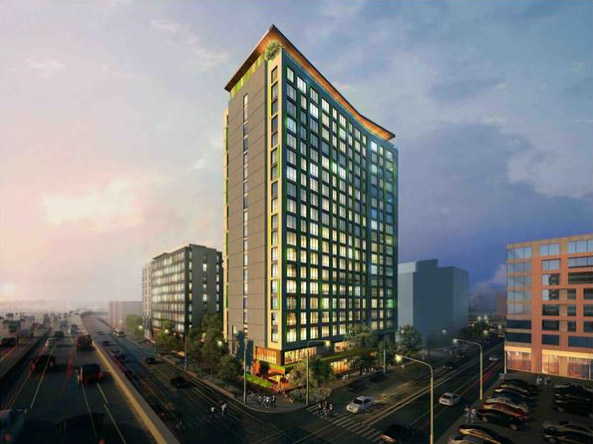 An artist rendering of the $185 million residential project will feature a 19-story high-rise and an 11-story mid-rise at 275 Albany St.

Its happening yet again, another significant development has just broken ground in Boston. This time the news comes to us from the lovely South End neighborhood where 275 Albany, a $185 Million endeavor, has just seen construction get underway. To consist of a 19-story high rise and a 11-story mid rise, the entire project will feature 380 studio, one-bedroom, and two-bedroom units.

This comes on the heels of another announcement from down the street at 600 Harrison where a 160-unit development just gained approval. So while 600 Harrison will soon follow suit and break ground, it is at 275 Albany Street where upwards of 330,000 square feet is now well on its way to being built.

The taller tower is located on Traveler Street and will have 220-units, in addition to 2,000 square feet being dedicated to retail space and also amenities space in the penthouse. The mid-rise tower on East Berkeley Street will see almost 180 units constructed, with a further 4,000 square feet of retail and amenities space, and a 180-car parking garage.

The developers behind this deal are New Jersey-based Normandy Real Estate Partners who have partnered up with Gerding Edlen of Portland, Oregon. In fact, we initially even reported on this story back in October of 2012 when the proposal for this 60,000 square foot site was just beginning to gain steam. Initially, the Boston Redevelopment Authority approved the construction of two hotels to be built at the site in 2010. However, it was in 2012 when the developers filed a change in plans to one hotel and one apartment building, only to alter their vision yet again and amend it to have just two primarily residential towers.

The specific location of this project is across the street from what is known as the Ink Block. It is here where the National Development of Newton is already constructing 83 luxury condominium units as well as 392 spectacular apartments at the now former Boston Herald site. The ever-changing landscape does not end there as Nordblom Co. also filed plans for two buildings at 345 Harrison Avenue that would see a 14-story tower with 369 units erected on Harrison Avenue, while 233 units would rise in a 13-story building along Washington Street. Still worried about the level of inventory for quality residential space in the South End and beyond? All of that is well on its way to being solved.