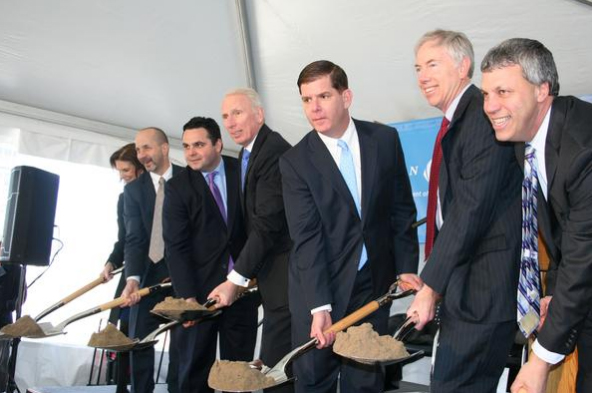 Have you heard? The Seaport District in Boston is the next hotbed for real estate. Truly, it has been for quite some time, and the future of this buzzing area of the Hub has never looked brighter. With an array of groundbreakings, announcements of future developments, proposals, and grand openings taking place, the skyline of the Seaport District is rapidly changing for the better. A place that was formerly defined by vacant parking lots and warehouses will now soon see another building constructed that has just broken ground this week.

The $300 Million office tower is being built by The Fallon Co., and will see a brilliant 17-story, 515,000 square foot facility erected in Fan Pier. This built-to-suit tower will be next to the Institute of Contemporary Art, and will house the offices of the Goodwin Procter LLP law firm.

Mayor Martin J. Walsh was in attendance and helped break the ground at the address, specifically 100 Northern Avenue. Mayor Walsh commented on this momentous occasion by stating, We will see from the rising grounds here, it will not be just steel and glass, but it will be an engine of opportunity for thousands of Bostonians. It will create opportunities for those who live and work here now and it will attract many new people for years to come. Thats the kind of growth we need in the city of Boston.

The Fan Pier tower is being designed by the architectural firm known as Hok. 380,000 of the total 515,000 square feet will be used as a new headquarters by Goodwin Procter, with the rest of the projects dedicated spaces to be used for other office purposes and retail units. The building will represent the fifth tower at Fan Pier, which is already one of the nations largest privately funded development sites. Within this 21-acre area of the Seaport, some three million square feet of mixed-use residential, office, retail, and other spaces are being built along the Boston Harbor.

The four other properties along Fan Pier that are in the pipeline include the two buildings for Vertex Pharmaceuticals, the One Marina Park Drive project, and the new condominium tower under construction behind the Vertex property. Regina Pisa, the Chairman of Goodwin Procter, praised Joseph Fallons ambition and dedication for getting this latest building underway when she concluded that, It takes vision and tenacity to execute a project of this magnitude that will really transform the city of Boston.