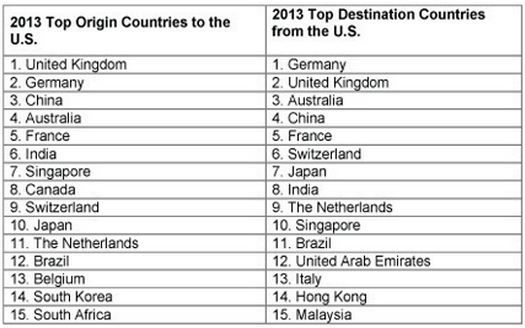 The locations where the most people are coming from when moving to the U.S., and where Americans are moving to in 2013

The improvement in the real estate market, especially as it pertains to our local market, is due to an array of factors. All encompassing, the result has been a drastic decrease in the average days on the market until a property sells, while the average prices and total volume of sales have skyrocketed in 2013. A massive influence to these positive trends have been the influx of buyers coming to our shores from overseas. Here at Gibson Sothebys International Realty, we have noticed a severe uptick in this phenomenon in 2013, especially from individuals coming from China. Now, a nationwide study has just found that for the first time in four years, there were more moves from China to the United States than from the United States to China.

In total, the United Kingdom remains as the number one location for people buying real estate and moving to our country, just as it has done for seven of the past eight years. This study was enacted by UniGroup Relocations International Migration Study, with this firm having moved more than 260,000 families on average each year.

Ever since 2010, UniGroup Relocation have been tracking these statistics of moves to or from the United States and all of the nations involved. Michael Stoll, an economist, professor, and chair of the Department of Public Policy at the University of California, Los Angeles, noted that, The U.S. only saw a moving deficit to two of the countries on the top destination and origin lists, demonstrating the U.S. economys international strength. Indeed, it is truly a wonderfully positive realization that our real estate markets and broader economy is still considered an opportunity and a wise long-term investment, something that the global populace is still keen to explore.

Some of the other key trends in the 2013 migration patterns included the following:

Europe - Both Germany and the United Kingdom were the two top locations for both origin and destination places. When compared to 2012, France moved from the fifth to sixth position for destinations of U.S. nationals moving away, while Italy stayed at the number thirteen spot, Switzerland at the number nine ranking and Belgium fell to number thirteen from number twelve in 2012.

Asia Pacific - For the destination list, Japan moved to number seven from being in the ten slot in 2012. Hong Kong moved from the fourteen position to number fifteen in destinations, while as mentioned above, China had a moving deficit to the United States in 2013.