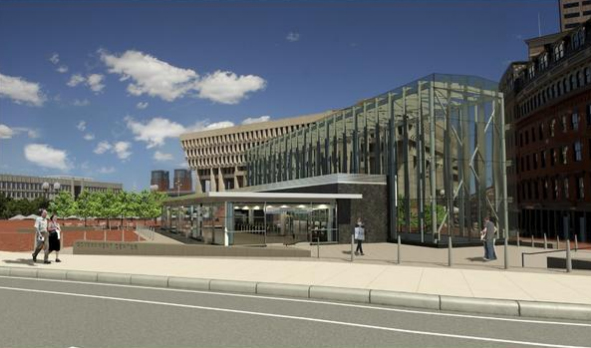 Boston is a far easier place to get around than it used to for many reasons. The completion of the seemingly never ending Big Dig was one massive improvement, while there have been countless other upgrades to our rail systems, sidewalks, roads, and more. In fact, we just recently reported that the State of Massachusetts has committed an astounding $12 Billion over the next five years to solely go towards continuously improving our transportation options. The most recent news, however, comes to us from the Massachusetts Bay Transportation Authority (MBTA), who have closed the Government Center station to begin work on an $82 Million renovation.

It all started over this past weekend, with the two-year project being designed by Boston-based HDR Inc., and being built by Barletta Cos. out of Canton, Massachusetts. To begin, the exterior of the property will be beautifully landscaped and also completely modernized. It will see its image transition from its current brick exterior facade to one that will have a glass and steel entrance leading to fresh new lobbies and elevators to the Green and Blue Lines of the MBTA.

Some of the other notable significant changes include an expanded fare collection area, new lighting throughout the station, better finishes on the interior of the building, and a new emergency exit struction along Cambridge Street. On the Green and Blue Line platforms, brand new retail spaces will be built, while a new security-monitoring system will be in effect all throughout every corner of the station.

Officials contemplated keeping the station open during construction, however that endeavor would have extended the project for an additional two years and would have costed a further $20 Million. Indeed, the rapid approach seems to be best for all parties, the city, the MBTA, and all who use this station. Calming any worry that there will be a great deal of noise at the site of the construction, Daniel Beaulieu, the project manager representing the MBTA noted that, The below-grade elements are the bulk of the work, explaining that most of the construction will occur underground.

Upon completion in 2016, the Government Center station will finally be handicapped accessible. Currently, the station is the ninth busiest amongst all MBTA stops, although it is the largest transit hub stop lacking wheelchair accessibility. The station was built in 1898, yet has not undergone a major renovation since the mid 1960s, hence the opportunistic time to take action today.

As a slight inconvenience to travellers, the MBTA has said that people must now detour on the Orange Line through the Downtown Crossing or Haymarket stations and then board the Blue Line at State Street. Furthermore, they shared that the MBTA will be offering special bus services connecting the Haymarket, Bowdoin, Government Center, and State Street systems together.