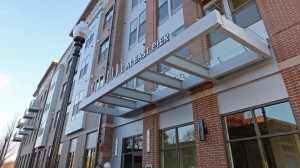 Extensive planning for Portside at East Pier began in 1997 while construction began in 2006. Progress was soon after paused due to the market decline, to be picked back up in 2012 after Massport restructured the ground lease. The plan of this luxury apartment complex includes seven buildings over a 13-acre Massport-owned waterfront property. When complete, the number of apartments will total 550, along with 17,000 square feet of retail space.

President of Roseland Properties, Marshall Tycher, who is the developer based out New Jersey stated, Weve been through a few recessions and a rigorous process with the community. But now weve opened in Boston during a boom time with a project thats the epitome of urban regentrification.

Portside couldnt be in a more pristine location. Some conveniences include extraordinary views of the city across the Boston Harbor, easy accessible transport- only a block away from the Maverick Square Blue Line T stop- as well as numerous shops and restaurants in the immediate vicinity. One of Portsides operations managers, Michelle Ronayne, spoke on their on-call water taxi service offered out of a pier behind the property saying, Its actually easier to commute to downtown Boston from here than from much of the Seaport District. You can either go by water taxi or go two subway stops to State Street.

Some stand out features included in a one-bedroom unit that was viewed include espresso-stained cabinets, granite counters with a breakfast bar and Whirlpool stainless-steel appliances. It includes a living/dining area with hardwood-look vinyl flooring, a carpeted bedroom and a porcelain-tiled bathroom. This 820-square-foot unit is renting for $2,500 a month.

Another unit that is 1,407 square feet with two bedrooms, two bathrooms, and a magnificent view of the Boston skyline is renting for $4,700/month. Some features in this end unit are an open kitchen/living/dining area with a granite island, a wall of windows and two glass doors out to a wraparound balcony.

Other outstanding amenities of the building include a 24-hour concierge service, a Wi-Fi enabled clubroom with a gas fireplace, a catering kitchen, a billiards table and gaming area, a business conference room, a childrens playroom and a fitness facility.

Were seeing renters from East Boston, the Seaport District and the North End who are coming over here for the view and moving here to get more space for the money, said Frank McAdams, Portsides director of operations.

It has been reported that 24 apartments were leased in the first two weeks which is great movement for Portside at East Pier. The next two buildings are scheduled to break ground in the spring adding an indoor swimming pool and roof decks. East Boston is on the rise and couldnt see better progress of this luxury development. The opening is a major step in creating a dynamic, thriving waterfront neighborhood.