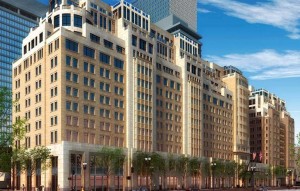 The Mandarin Oriental complex, a 14-story property that sets a standard of luxury in Boston, is set to convert twenty-five of their apartments into luxury condominiums. The owners of the Back Bay complex are ending their leases with the current residents and the one-and-two-bedroom units are predicted to take in some of the highest prices the condo sales market has seen!

Currently, the number of luxury condos available for sale in the Back Bay area is at a low of 30. This extreme imbalance between supply and demand has been driving prices to record levels in Boston. This year, units in the city have been selling in record time for prices rarely seen in the past. Six units have sold for more than $2,000 per square foot and another 3,500 square foot unit sold for more than $10 million at roughly $2,900 a square foot.

In the last three years, Bostons population has increased by more than 30,000 people totaling approximately 650,000. Unfortunately due to the economic downturn between 2007 and 2010, construction of new condos froze. However, todays market is seeing a great deal of new condominiums being built with many sellers also now more willing to test the market. With this, these new luxury units at Mandarin Oriental could not arise at a better time as they add inventory to a market that is very strong in demand.

The 25 units that are set to go on sale in January range from 930-square foot one-bedrooms to two-bedrooms with 1,625 square feet. The asking price of each unit has not yet been determined but in the past year units at the building have sold for $3.7 million up to $12 million. All buyers will have the luxury of using the Mandarins amenities including the spa, fitness center, and 24-hour concierge service.

Our very own chief executive and co-owner here at Gibson Sothebys International Realty, Larry Rideout, stated, Its really amazing to watch. Were starting to get almost a Manhattan feel with some of our real estate.

The remaining 10 apartments that were developed to fulfill the citys inclusionary zoning policy will remain as affordable apartments. These units rent between $1,400 and $2,000 a month.

Mandarin Oriental remains at the center of attention that once challenged the citys traditional expressions of wealth when it was first completed in 2008. It really is joining a surging market as it converts apartments to luxury condos which will immediately be satisfied by the large pool of qualified buyers. There are plans for major competition to be built in the years ahead in Downtown Crossing, Back Bay, on the South Boston waterfront, and beyond as more developers try to hurry and build while the economy and buyer demand remain with such a positive outlook.