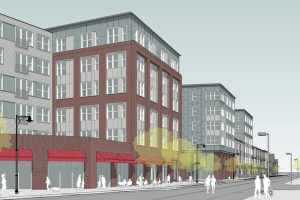 A project that began planning nearly three years ago has begun demolition on the Commons at Forest Hills Station in Jamaica Plain. This $90M, 283-unit midmarket apartment complex is scheduled for occupancy in spring 2016.

A partnership between a Braintree and Boston-based lobbyist, Forest Hills Arborway LLC, will develop this $90M project. The permits for this development were obtained last fall from the Boston Redevelopment Authority and so using the past year to finalize all construction plans. With total development expecting almost $300,000 to $310,000 per unit, the average rent for a two-bedroom unit will be $2,650.

The Commons at Forest Hills Station is conveniently located on a 2.8 acre site at 3593-3615 Washington Street, minutes away from the Forest Hills public transit stop and across from a bus lot owned by the Massachusetts Bay Transit Authority.

The project site was thoroughly cleaned and treated for years before demolition as it was once a petroleum distribution facility for nearly a century. Approximately 1.5 million gallons of contaminated groundwater was treated by Forest Hills Arborway LLC enabling the location to be a safe site for a housing development.

Richard High, president of one of the partnering developers, stated, We're all very aware of so much of the housing getting built at the top end of the market. This appeared to be an opportunity to scale down the height to try to bring the housing in at a price point that would meet more of a middle-income market. Over the next two decades Mayor Martin Walsh is strongly advocating that 53,000 new housing units be built with this new development.