In 2014, women artists played a prominent role in the Sothebys Auction House Art Market. There was a surge in appreciation of works done by female artists achieving prices that were record breaking.

Jimson Weed of 1932, an iconic flower painting done by Georgia OKeeffe, more than tripled the former world auction record for any female artist. The piece drew in an outstanding $44.4M in New York this past November. This landed OKeeffe 8th overall in the top 10 highest sold pieces at the Sothebys Auction House for all of 2014. 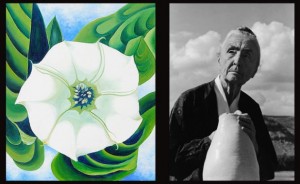 Jimson Weed of 1932 by Georgia O'Keeffee

Other notable female artist figures in 2014 include Kay Sage, Vija Celmins, Artemisia Gentileschi, and Julia Margaret Cameron. American artist Kay Sage, emerged from the shadow of her husbands reputation with her suggestive painting Le Passage of 1956. The piece immensely exceeded predicted sales when it sold for $7.1M.

The time and effort put into pieces by Vija Celmins is a scarcity seen by collectors. Her labor-intensive and meticulously detailed work is hard to come by which leads to furious competition when it appears at auction. Burning Plane from 1965 doubled the high estimate of $1.2M selling for $3.4M.

The Baroque artist Artemisia Gentileschi set a new record for herself taking in a remarkable sum of $1.2M exceeding predicted sale prices by almost $100,000. Lastly, Julia Margaret Cameron doubled her previous record auctioning No. 5 of a series of twelve life-sized heads for $461,000.

Closing out the year with record prices, this outstanding growth in appreciation for women artists demonstrates that the best is yet to come for the Sothebys Auction House.