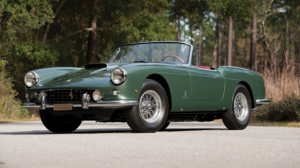 Sothebys and RM Auctions have proudly announced the formation of their most recent partnership. Sothebys acquired 25 percent ownership interest in the worlds leading auctioneer of premium collectible automobiles, RM Auctions, and will now operate as RM Sothebys.

Sothebys and RM have collaborated in the past on a number of successful sales, one including the Art of the Automobile auction which achieved nearly $63 million in just two hours. Sothebys will have opportunities to increase their ownership as the partnership evolves working together to drive growth.

Rob Myers, Chairman and Founder of RM Auctions added, The partnership that has been formed between RM Auctions and Sothebys is undoubtedly the most effective way for us to reach the ever-growing worldwide audience of collectors who take a keen interest in the collector car asset class. No other organization in the world has a client base as far-reaching as Sothebys and since we have worked so closely and successfully with them in the past, it makes perfect sense that we form a strategic partnership that creates a truly worldwide platform for collector cars. Its an exciting time in our company history, and for the hobby at large.

Bill Ruprecht, Sothebys President, Chairman, and CEO, commented on the excitement that Sotheby's has for joining such aclear market leader in the field.RM has established a formidable position that will only be strengthened by this new phase in our relationship. Just last year, RM set a new benchmark for a collector car auction with their flagship Monterey sale totaling more than $140 million, eclipsing the previous record they had established in 2013. The incredible synergy between our businesses, including significant overlap of top collectors and a focus on new markets, will be further strengthened as we work together to expand the classic car collector base. RMs ownership of the high end of the market coupled with our global client network positions us for great success at a time when the market for investment-quality motor cars has never been stronger.

Sothebys Auction House was founded in 1744, the Sothebys name has earned renown as a marketer of the worlds most valuable and prestigious possessions. The Sotheby's International Realty network was founded in 1976 to provide independent brokerages with a powerful marketing and referral program for luxury listings. From 2004 to 2014 over $1.2 Billion of sales have been referred to Sothebys International Realty from the Sothebys Auction House.