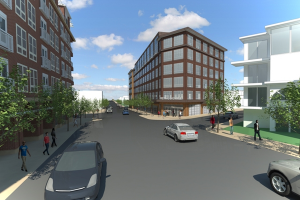 According to the Boston Business Journal, seven large project proposals have been approved by the Boston Redevelopment Authority. Spanned across neighborhoods such as the Fenway, Ashmont in Dorchester, East Boston, and South Boston these projects are expected to combine a total development cost of $490 million.

Located at the corner of Brookline Ave and Boylston Street in the Fenway neighborhood, the Point, is a 390,460 square foot, $290 million project. It will create a 30-story mixed-use tower with 240 rental units, 109 condominiums, 25,000 square feet of retail space, and 17,000 square feet of pedestrian open space.

Located at 1961- 1981 Dorchester in the Ashmont neighborhood a $40 million transit-oriented project will include 87 housing units and span 106,000 square feet.

Located at 248 Dorchester Ave in South Boston, an existing business will be demolished to develop a 33 unit residential building. This 43,650 square foot, $11.5 million six-story housing development will include on-site parking for every unit and 4,400 square feet of retail space.

The seven projects are expected to create 772 construction jobs during a two-year period with combined construction costs totaling $185.5 million.