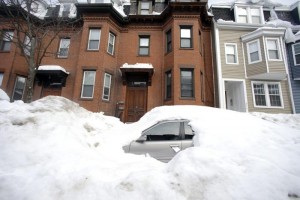 The record level of snow fall not only in Boston but all of Massachusetts this winter has played a huge role in the real estate market.The success in 2014 came to a halt with the beginning of what was soon to be one of the snowiest winters Boston has ever seen. With now over 100 inches of snow accumulated it is hard to believe that spring is just around the corner.

The Massachusetts Association of REALTORS (MAR) reported that single-family home sales closed down 4.9 percent compared to last year in January and were not able to build on the success of December 2014. Together with condominium sales being down median prices for both remained up.

MAR President, Corinne Fitzgerald, remains optimistic stating, With inventory down, prices up, and closings pushed off because of the several snow storms and a blizzard the last week of the month, we feel good about the number of home sales that did close in January. Even with our crystal ball buried in a snowbank, we can predict that the real estate market numbers going forward will be impacted by the record snow amounts.

Pent up demand is expected to create a sizzling spring market which is soon to explode. Boston.com seemed to hit the nail on the headin saying that sellers who have been gearing up, in some cases for months, to put their homes on the market in March, are now looking to April or even May.

Many listing agents have predicted that thelate start to the spring market is going to create a crazy season. Buyers are abundant and due to the extreme lack of inventory they are anxious to find and buy. One listing specialist from the western suburbswas over joyedto see anoverflow crowd showup to a recent open house, We had 30 people in 90 minutes, she recalled. They were traipsing through the snow with the most determined looks on their faces.

Many sellers are reportedly holding off on listing their home in hopes that once the snow melts it will be an overall better experience for all parties. It will be easier to navigate the city and and have a better feelof the home being able to enjoy the grounds and in some cases private decks.

There is no doubt that the spring market has begun and as temperatures rise listings are only expected to become more and more abundant. Here alone at Gibson Sothebys International Realty we have seen an increase of new listings over the past few weeks reassuring that spring IS just around the corner.