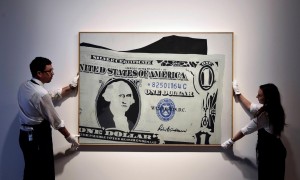 Warhol's 'One Dollar Bill (Silver Certificate) painted by hand in 1962 sold for an outstanding 20.9m

A new height has been reached at Sothebys as they achieved the highest total ever for contemporary art in London. The auction raised a total of 130.4m and included works from Andy Warhol, Lucien Freud and Gerhard Richter.

The total sales of 130,376,500 broke the previous record of 123.5m set earlier this year, with 49 lots sold on the night. Bidders from across the globe were drawn to Warhol works that ripped up the rule book for 20th-century art; rediscovered Francis Bacon gems; and some of the greatest works by British artists of the last 70 years. Tonights achievements affirm the pivotal position of London within the international art market, said Alex Branczik, Sothebys head of contemporary art.

Sothebys stated that 78% of the works had never previously been offered at auction which lead to such success. Two newly discovered self-portraits by Francis Bacon that had never been on public exhibition before this year sold for 30m.

The value of contemporary art has skyrocketed this year and according to Philip Hoffman, chief executive of the Fine Art Fund Group, It is the most desirable market. Its the most liquid market. Its sexy, its easy to understand, you can read up on it quite fast, theres not too much history involved.