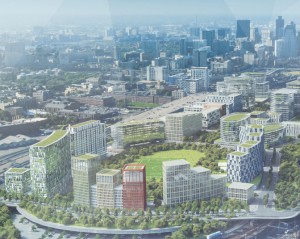 No Boston Olympics? No problem! The Boston 2024 Real Estate Committee believes that the 83-acre plot of land in Widett Circle still has the potential to add value to the future Boston Real Estate market. The Midtown Development Planpresented by Boston 2024 emphasized in their proposal the build out could "proceed with or without the Olympics."

Members of the Boston 2024 real estate committee constructeda plan that would make Widett Circle the next Copley Place. As we know, Copley Place connected the South End and Back Bay many decades ago.The laid out plan for Widett Circle wasto connect the South End, South Station and South Boston together creating a booming area for future tenants. A site that runs alongside the Redline, with the Olympics the idea was to create a mixed-use development with 7.89 million square feet of office, residential, and retail space creating a long-term benefit for the city.

Now that the Olympics are not involved, the decision on how and if the development will move forward lies in the hands of the Boston Redevelopment Authority. Many believe that this project may be accelerated considering the stress of an Olympic stadium being built is now removed. However, there is talk that the feel of this development will change.

One other consideration is building a permanent New England Revolution stadium. As we know, Boston is a tourist attraction in itself and the in-town stadium would attract more international visitors not only increasing the Revolutions sales but also an increase for the businesses in the area.

Although the Olympic games would have added over thousands of jobs, housing units and an increase in revenue, the city of Boston is not at a total loss with the bid removal. The city has made it clear that Widett Circle is still a priority.

Widett Circle is the citys next major scheme as the Boston Redevelopment Authority continues to develop their proposal of Imagine Boston 2030, its citywide master plan. This Midtown areawill not go to waste as their planning department is now studying the site to determine how best to catalyze future growth along the road. This 80-plus-acre site on transit in the middle of the city is extremely valuable for the future of Boston real estate.