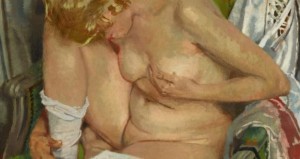 The Sotheby's Auction House in Londonhas relaunched the annual Irish Saledue to an increase in interest which signalsconfidence in the Irish art market.

Arabella Bishop, head of Sotheby's Ireland, said that "the moment is right to relaunch a dedicated annual sale as new collectors - both from Ireland and internationally - are actively buying and bidding for Irish art."

The reinstated event will take place on October 21st with the principal lot being a painting by Sir William Orpen titled Nude Girl Reading. This piece painted in Paris in 1921 has a top estimate of500,000 ($774,300.00 USD).Orpen, born in Stillorgan, Co Dublin, was a leading portrait painter in London and one of Britain's official first World War artists.

After Irish art prices crashed following the economic downturn 4 years ago the sale was dropped. Now Sotheby's has relaunched the event, moved its Irish office into bigger premises and opened a new office. These three factors ultimately "cement its commitment to the Irish market."