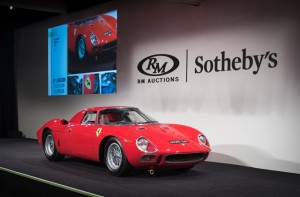 Monterey Car Week, which wrapped up two weeks ago in California, saw an incredible array of cars pass the auction block, setting company and global records in the process. Of the auction houses in attendance, we are proud to announce that RM Sothebys took home the most in sales throughout the week, with a staggering $172.7 million worth of cars being sold. This is an increase of more than 20-percent from RM Sothebys auction last year and a record for the highest grossing collector car auction of all-time.

Most notably, RM Sothebys topped the list of highest cars sold at auction with their red 964 Ferrari 250 LM, one of 32 of its kind, for $17.6 million, a record for the model, according to Bloomberg Business. Also drawing attention was the sale of a McLaren F1 LM Specification, which sold for $13.75 million, making it the most expensive McLaren F1 in the world.

In total, RM Sothebys brokered 126 cars. The median sales price of the automobiles represented by RM Sothebys weighed in at $420,750, second only to Gooding & Company. RM Sothebys is the worlds largest auction house for investment-quality automobiles and employs the largest team of automobile specialists in the world. Like our team at Sothebys International Realty, RM Sothebys is located virtually around the globe and offers services in a variety of different languages.