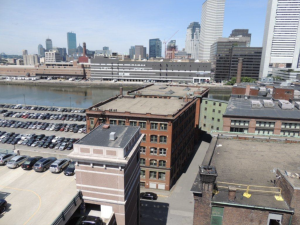 According to the Boston Business Journal, General Electric has announced that Necco Court in Boston's Fort Point neighborhood will be the home to their new headquarters.

GE plans on both renovating an existing space and building a new headquarters with the purchase of 2.5 acres of Proctor & Gamble's 44-acre South Boston campus.

Currently under agreement is 5 Necco Court and 6 Necco Street - two six-story brick and beam former candy manufacturing buildings which span 110,000 square feet. The company is likely to spend up to $100 million in renovating these two buildings along with constructed a third, according to GE's CEO, Jeff Immelt.