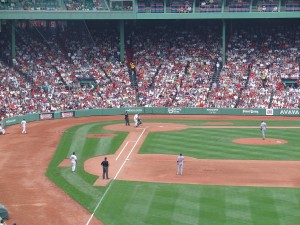 U.S. News recently looked into this phenomena and found that such flourishing and successful relationships between sports and suburbs are few and far between. In a survey of 2,000 people across America, only 17.8 percent of respondents rated professional sports of significant importance to them in their hometown. And yet, Bostons Fenway neighborhood has home values that are 66.3 percent higher than the metro average.

A local leasing manager who interviewed for the piece, attributes this above-average proliferation to the unique energy the stadium brings to its surrounding neighborhood.

It adds an element of excitement because theres more foot traffic--a lot more people. During that time of year theres a lot more action going on...The people that go to live there expect that, he said.

Fenway Park opened in 1912--104 years ago--and remains the greatest, most culturally rich stadium of all time. It blessed the Red Sox with a 7-6 win over the Yankees for its very first game, and has seen incredible magic happen within its stands ever since.

In the last few years the Fenway-Kenmore neighborhood has seen an incredible revitalization in the form of both booming commercial and residential development. In 2015, The New York Times took notice of these changes and wrote up an in-depth report on the area, citing developments such as City Target, Fenway Triangle Trilogy, and the upcoming renovation of Landmark Center to come this year.

Jonathan Greely, director of development and review for the Boston Redevelopment Authority, has been closely involved with the latest renovations to the neighborhood. He believes it is truly an 18 hours a day, 365 days a year place...and if someone says theyre going to the Fenway, it doesnt mean theyre going to the Red Sox necessarily.