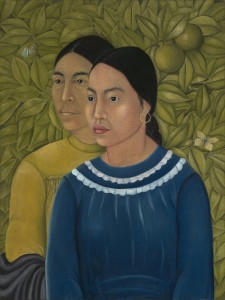 In January of this year, the Boston Museum of Fine Arts (MFA) acquired Frida Kahlos Dos Mujeres (Salvadora e Herminia). This is one of the earliest works by the iconic Mexican painter who has enchanted generations. It is currently on display as part of the MFAs ongoing exhibit called Making Modern.

Our dream was to acquire something by Frida Kahlo, who is an artist who really was a pathfinder This came on the market and everybody knew that it was going to be important for us and help us invite new audiences into the MFA. - MFA Director Matthew Teitelbaum in interview with NPR

There is much that is remarkable about this painting. Dos Mujeres was the first painting Kahlo ever sold. It is the first to be acquired by a museum in New England. It is one of only 12 Kahlo paintings in public collections around the world. But, perhaps the most remarkable thing is her age and the state of her health at the time of the painting.

Frida Kahlo was only 21 years old when she painted Dos Mujeres. She was still recovering from a devastating bus crash that, three years prior, had crushed her foot and shattered her pelvis, legs and ribs. The accident rendered her bed-ridden for three months. She endured what would become decades of reparative surgeries.

A little while ago, not much more than a few days ago, I was a child who went about in a world of colors Now I live in a painful planet, transparent as ice - Frida in a letter to Alejandro Gmez Arias, (29 September 1926) 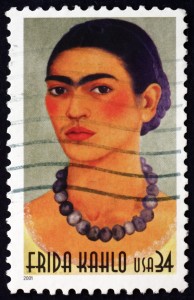 Kahlo received some art books from a friend and began painting as a means of occupying her mind as she healed her body. The two women, her dos mujeres, worked as maids in Kahlos family home, just outside of Mexico City. They likely assisted her in her convalescence, as her love and admiration for them is palpable in the portrait. It is a beautiful and respectful depiction of two working-class women an innovative and prevalent theme in Mexican art in the time after the Mexican Revolution.

Though Kahlo had written in her correspondence that her world was now a painful planet, transparent as ice, this painting is virtually drenched in color. Viewers will notice the incredible warmth that appears to be emanating from the women in the foreground and the lushness of the foliage in the background. It is as though the canvas is somehow lit from within as if Kahlo painted on glass that was now illuminated from behind. The vibrant verdant hues of the leaves and their overlapping shapes create a wonderfully rhythmic pattern. She included little elements of whimsy, with insects positioned on the leaves. It almost feels as though the work is a moment in an animation and the figures will soon exit the scene.

Biographer Hayden Herrera said of Kahlo, The accident turned her into a painter. I mean, not just because it was a practical thing to do, but because she needed something to hold onto, and I think painting her self-image over and over again was a way of creating something that she could hold onto that steadied her. With the color and vitality of the painting, one cannot help but believe that Kahlo was building new hope for her future. 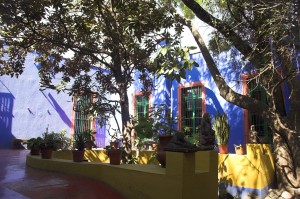 The works importance to the MFA is clear through its position within the gallery space. It is displayed unusually, emerging vertically from a podium in the center of the room mounted like a diamond on an engagement ring. This allows viewers to spy the inscription on the back, which includes the artists signature and that of her future husband and world-renowned muralist, Diego Rivera. The collector who bought it, Jackson Cole Phillips, also signed it.

Phillips purchased the work from Kahlo in 1929 and it remained in his family until the MFA acquired it. The museums conservator has speculated about how the work may have been transported. I have a suspicion that maybe he just rolled it up and took it home in his suitcase, Rhona MacBeth said in an NPR interview, partly because of these little cracks here which are rather unusual and horizontal. MacBeth is the Conservator of Paintings at the MFA. After having worked on Dos Mujeres, one can surmise that she is acquainted with the work nearly as intimately as the painter herself.

Kahlo produced fewer than 150 paintings in her brief lifetime, a tiny sum when compared to her contemporaries. Consider that Georgia OKeefes legacy includes thousands of works and approximately 500 pieces in over 100 public collections worldwide. The Mexican government declared the works of Frida Kahlo as National Monuments in 1984. This example of Cultural Patrimony prohibits the work from being exported from Mexico, thereby limiting the potential for museums or private collectors outside of the country to obtain her work. After seeing Dos Mujeres, one understands Mexicos desire to protect these masterpieces.

Dos Mujeres is part of the ongoing Making Modern exhibit. Kahlos painting is in the company of dozens of other visual innovators. A photographic portrait of Kahlo by Imogen Cunningham hangs near Kahlos canvas. A work by Diego Rivera is also nearby. They are joined by OKeeffe, Pollock, Motherwell, Weston, Rivera, Sheeler, Dove, Beckman, and others.

While their art is consistently revolutionary, the themes are often contrasting. Georgia OKeeffes canvases are of her trademark flowers, cow skulls, and adobes relics of the southwest. Meanwhile, Sheelers canvas is a graphic representation of a steel factory in Pittsburgh. Finally, Motherwells huge canvas dives into pure abstraction, with rough black and white lines on a field of ochre. While the themes contrast, the paintings are at home with one another, allowing our eyes and mind to wander the varied and textured experiences of the artists.

The modern artist is working with space and time, and expressing his feelings rather than illustrating. - Jackson Pollock

A clever video installation allows visitors to do a side-by-side comparison of the processes and works of Picasso and Pollock. This marks a mid-century stylistic and geographic shift in the art world: toward complete abstraction and toward New York. No longer was Europe the center of the universe. The revolution was happening on the new continent. This is not surprising, given the exodus of the creative class prior to and during World War II. Art freezes a moment in time; it has context that cannt be ignored. These artists beautifully captured those moments and MFA has put them on display for all t see.

This exhibit is housed within the The Art of the Americas Wing, which was rebuilt in 2010. The designers at Foster + Partners in London drew inspiration from the MFAs original plan by architect Guy Lowell, who envisioned a strong north-south axis for the building. This vision marries the building to its surroundings by reorienting the main entrance toward the Emerald Necklace. The greenery is also invited into the building with the glass-enclosed Shapiro Family Courtyard, where you may see artists sketching on oversized pads.

Norman Foster commented that, Over time the Museum had lost its connection to the Back Bay Fens and the beautiful landscape of Frederick Law Olmsteds Emerald Necklace. In restoring Lowells original plan and in opening up and reasserting the grand Fenway entrance, we have rediscovered this link. At the same time, we have drawn the landscape deep into the heart of the building and along Huntington Avenue. The result is a more legible museum that will create new connections between the park, the Museum and the local community.

The four-story atrium is home to a huge glass sculpture by Dale Chihuly, and an exhibit by Ai Weiwei. The New American Cafe is in the center of this bustling, bright and airy space. It was selected as one of the best museum restaurants in the US by Food & Wine in January 2014.

Other nearby museums underwent similar renovations that incorporated ultramodern design into existing traditional buildings. The neighboring, Venetian-styled Isabella Stewart Gardner Museum opened its ground-breaking addition in 2012. The design by Renzo Piano features a glass atrium and a corridor of greenhouses to accommodate and nurture the famous courtyards leafy residents throughout the year. It also includes a living room in which guests can relax and enjoy one of the many books on art that are on display.

As an architect, you have to provide a shelter to enjoy art. And you have to love art. Its like when you make a concert hall. You must love music. This is the reason why you make the space, to enjoy music - making a space for art is the same thing. - Renzo Piano

Piano was also selected for the Harvard Art Museums renovation, which was completed in late 2014.

Again, ample glass and steel were used to compliment and contrast the traditional elegance of the Fogg Museums Georgian-revival design. From the upper floors, visitors can see across the courtyard to artwork displayed on the other side. We can also catch a glimpse of the Museums collection of pigments that are used in conservation efforts.

In each of the renovations, the experience of viewing art is reclaimed for the visitors of today; not only in their spaces designs, but also in their uses. These museums are made more vital and relevant when visitors not only course through the galleries and exhibit halls, but also stop for lunch or a quick read. Artists are innovators, regularly bucking tradition and exploring new perspectives. In a way, the recent renovations to the MFA, Gardner, and Harvard Art Museums pay homage to that passion. The architects neither mimicked the existing buildings nor obscured them. In fact, their use of glass and simple geometric forms provides visual pass-throughs, while offering a new reflection on each Museums past.

Just as the MFAs new architecture captures the spirit of innovation, so does its acquisition, Dos Mujeres. Frida Kahlo designed a new path to vitality through her paintings. She beautifully captured that moment, and now the MFA is able to share it with all of us.