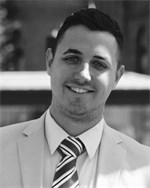 Ryan Glass is well-versed in communications, marketing, and real estate. This perfect storm of talent and expertise has allowed him to excel to the top of his field. Landing a spot on the cover of Realtor Magazines May/June issue, Ryan proudly joins the esteemed publications 30 under 30 class of 2017. Read more about what makes Ryan so special in our agent spotlight feature here.

The path to Realtor Magazines 30 under 30 is never paved. Forging his own way to the top, Ryan acquired his diverse skill-set through a variety of unique experiences; from public relations, to marketing, to working for the federal government, Ryan found his calling in real estate at just 20 years old.

After receiving his Bachelors degree in communication studies from Bridgewater State University, Ryan pursued a Masters degree in public affairs from the University of Massachusetts, Boston. Fresh on the job market with two specialized degrees, Ryan began a new chapter working with the United States government. He handled strategic communications and marketing for specific agency programs, developed public relations campaigns, and orchestrated press releases and social media campaigns. This extremely valuable experience at such a high level taught Ryan how to excel at professional communications. He began applying this learning to his own life, creating a personal brand through targeted outreach and content building.

Congruent to all of this, Ryan began to practice real estate part time. However, with his mastery communications experience, this side business grew extremely fast.

I knew I wanted to take the plunge, Ryan said of the urge to go all-in on real estate. I began taking on as much business as I possibly could. With the idea that he would max out his capacity to work both jobs, Ryan went full steam ahead into his work in real estate. This meant balancing operations with the federal government, and negotiating up to 12 deals at one time. Though most could not manage such an impressive workload, Ryan says it was the scariest and most exciting thing hes ever done; since then, he never looked back.

As for his feature in Realtor Magazine, which reaches over 2 million people nationwide, Ryan says it has been a dream of his since he was 18. As a highly involved member of his local Realtor Association chapter, Ryan has always enjoyed his role on the planning committee, helping plan for the annual roadshow, organize training seminars, and land notable keynote speakers such as Bill Rancic and Robert Cochran. Above all, Ryan loves the opportunity to meet other agents and learn how they build their own businesses.

Currently, Ryan is enjoying his new condo in the South End, taking advantage of its walkability to surrounding neighborhoods and impressive variety of restaurants and bars. If there were a 30 under 30 for property owners in the South End, Ryan would undoubtedly be featured proudly on that cover as well.

To learn more about Ryan, visit his agent profile here.