The ICA Watershed lends an expansive, open exhibition space that retains the rugged character of the building's past 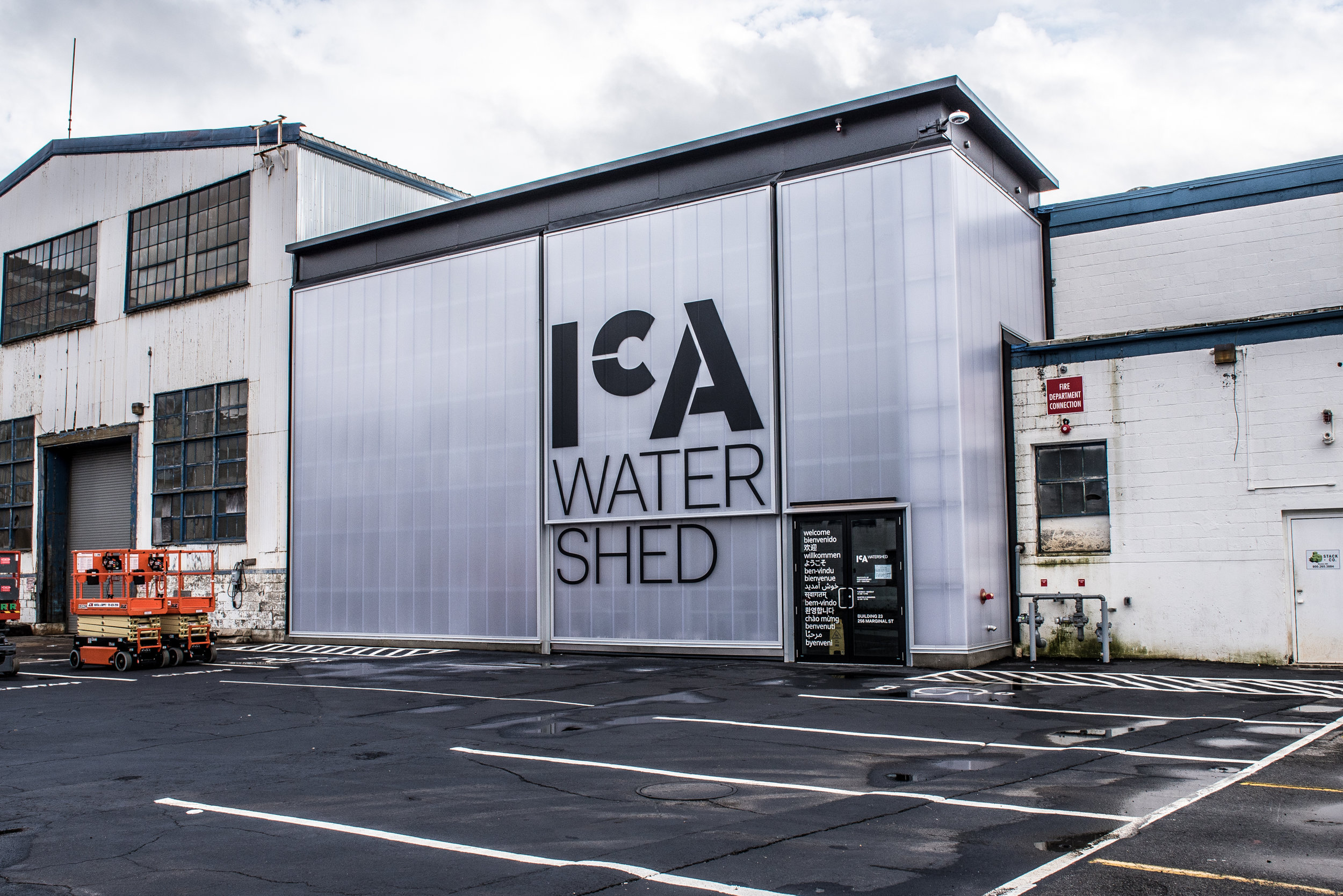 In East Bostons shipyard lies a former copper pipe and sheet metal factory first opened in the 19th century. Before longtime Institute of Contemporary Art director Jill Medvedow orchestrated the repurposing of the dilapidated structure, it was the only unoccupied building left in the active shipyard and marina. A sleek garage-style door ushers visitors into a 50-by-300-foot outpost. It's gritty but clean, with untouched exposed brick and a colossal new roof. Industrial gantries and chains hang from the ceiling. Old train tracks are still visible across the floor, keeping with the buildings original elements and wholeheartedly integrating the space with East Boston.

The Watershedwhich opens at the far end to the harboris named as a reference both to its location along Boston Harbor and what the museum hopes the new venue will symbolize for Bostons arts community. It is the neighborhoods first major arts destination, dramatically altering the vibe of East Bostons urban landscape.

It was Medvedow who initiated the move the ICA, founded in 1936, to the once-isolated Seaport neighborhood in 2006. Designed by Diller Scofidio + Renfro, the 65,000-square-foot contemporary art venue once stood alone in a sea of parking lots. Today, the area is booming with new construction, and the museum has further expanded into another less-treaded area with the lease of the condemned 15,000-square-foot space, located six minutes across the harbor. A $10 million restoration of the derelict building by Anmahian Winton Architects brought the building up to code.

We always knew, when we built the ICA, that there were going to be buildings that came up around and behind it, said Medvedow at The Watersheds ribbon-cutting in June. As we began to think about an expansion, we started to think about the ways in which we could welcome more and more people into the ICA community, how to expand the circle, how to grow our audience, [and] how to create extraordinary encounters with works of art. It seemed like an important and perfect spot.

With the development of The Watershed, the ICA has stressed the impact of the institution on the cultural and civic lives of its local communities. Admission is free (the ferry is included with museum admission, though the Watershed can be accessed via a 10-minute walk from the nearest T stop), and all exhibition texts are presented in English and Spanish, in the hope of being more accessible to East Boston residents, more than half of whom speak Spanish.

We wanted to make sure that people from East Boston felt welcome here, and that we reduced all barriers to participation, Medvedow has said. Its yet another way of trying to be inviting to people for whom sometimes museums are unfamiliar or daunting.

To that end, the long and narrow space features a wall map of what the area looked like in the early 1800s, highlighting the group of raised islands that were once East Boston. A shipyard gallery and short film that calls on historians, community leaders and residents to divulge the neighborhoods history is also on display. 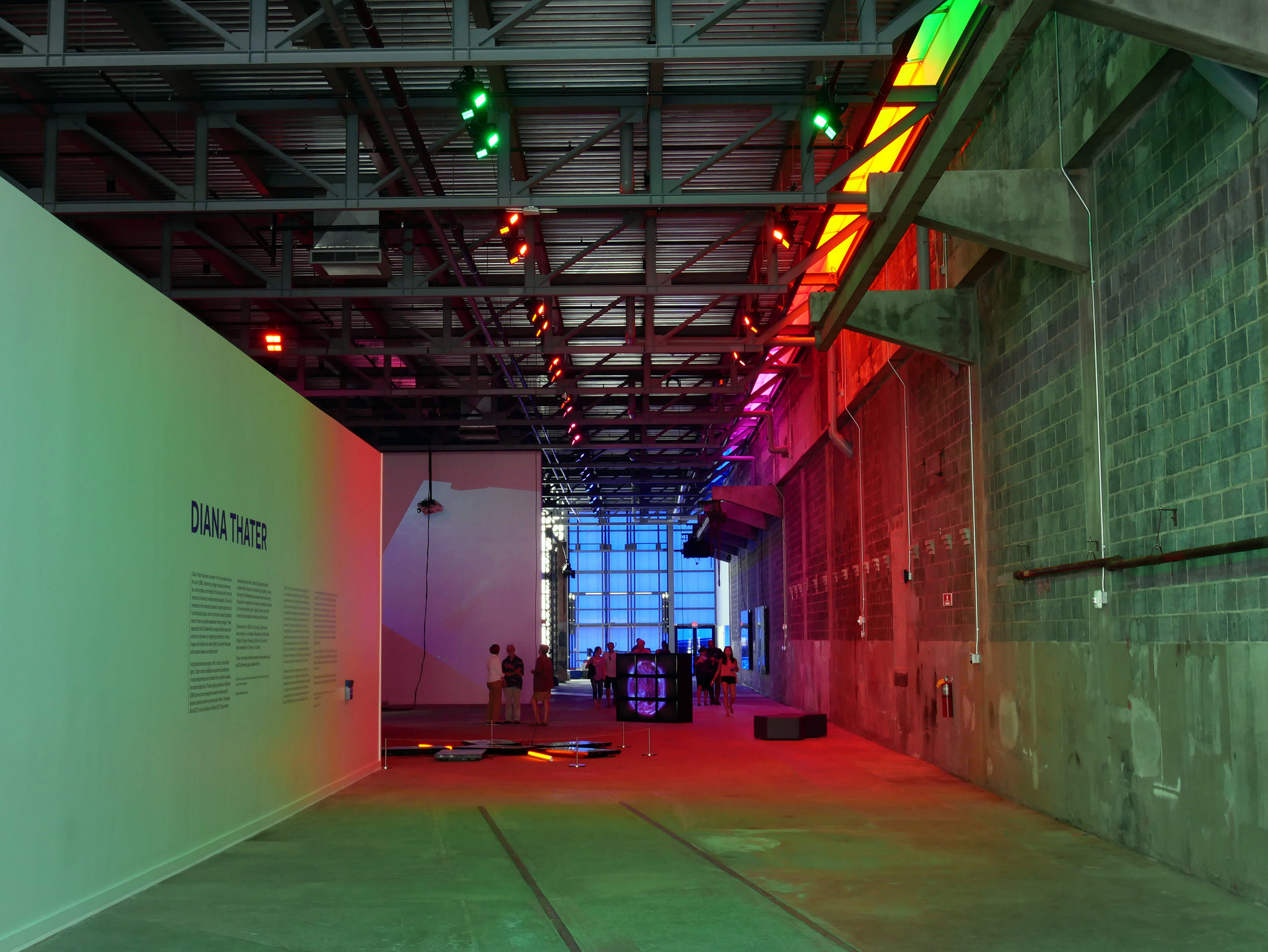 San Francisco-born artist Diana Thater inaugurated the new space with two monumental works. The installation centered on Delphine, designed as a response to The Watersheds raw, industrial space and waterfront location. According to the ICAs website, Delphine created an immersive underwater environment through underwater film and video footage of swimming dolphins across the museums ceiling, floor, and walls. As Medvedow described, Thaters immersive experiences through light and moving-image projections offer[ed] visitors an extraordinary introduction to the Watershed and raise[ed] urgent questions about the impact of human intervention on the environment.

Sculptural video installations including A Runaway World and As Radical as Reality comprise Thaters second exhibit, focused on the experiences of species on the verge of extinction and the illicit economies that threaten their survival.

Id say the mission of the space is multifold, continued Medvedow. One piece is having artists whose work has some relevance and connection to that site. That can include ideas about labor and the working people in that shipyard. In the case of Diana Thater, those ideas are about the fragility and vulnerability of the natural environment. In the future it might be about the material in that space.

The citys waterfront and harbor, scene of the historic Boston Tea Party, imparts a rich backdrop for artists exploring societal issuesfrom immigration to global commerce rising sea levels. After all, the shipyard used to be second only to Ellis Island as the largest port for immigration to America. That legacy continues as part of the makeup of East Boston.

The Watershed serves as a site for the type of large-scale solo presentations that do not fit comfortably within the walls of the ICA's flagship at Fan Pier in the Seaport. It is open to the public during the warm months of the year. A new exhibition will occupy the space for the next season, which will run between the months of May and October. 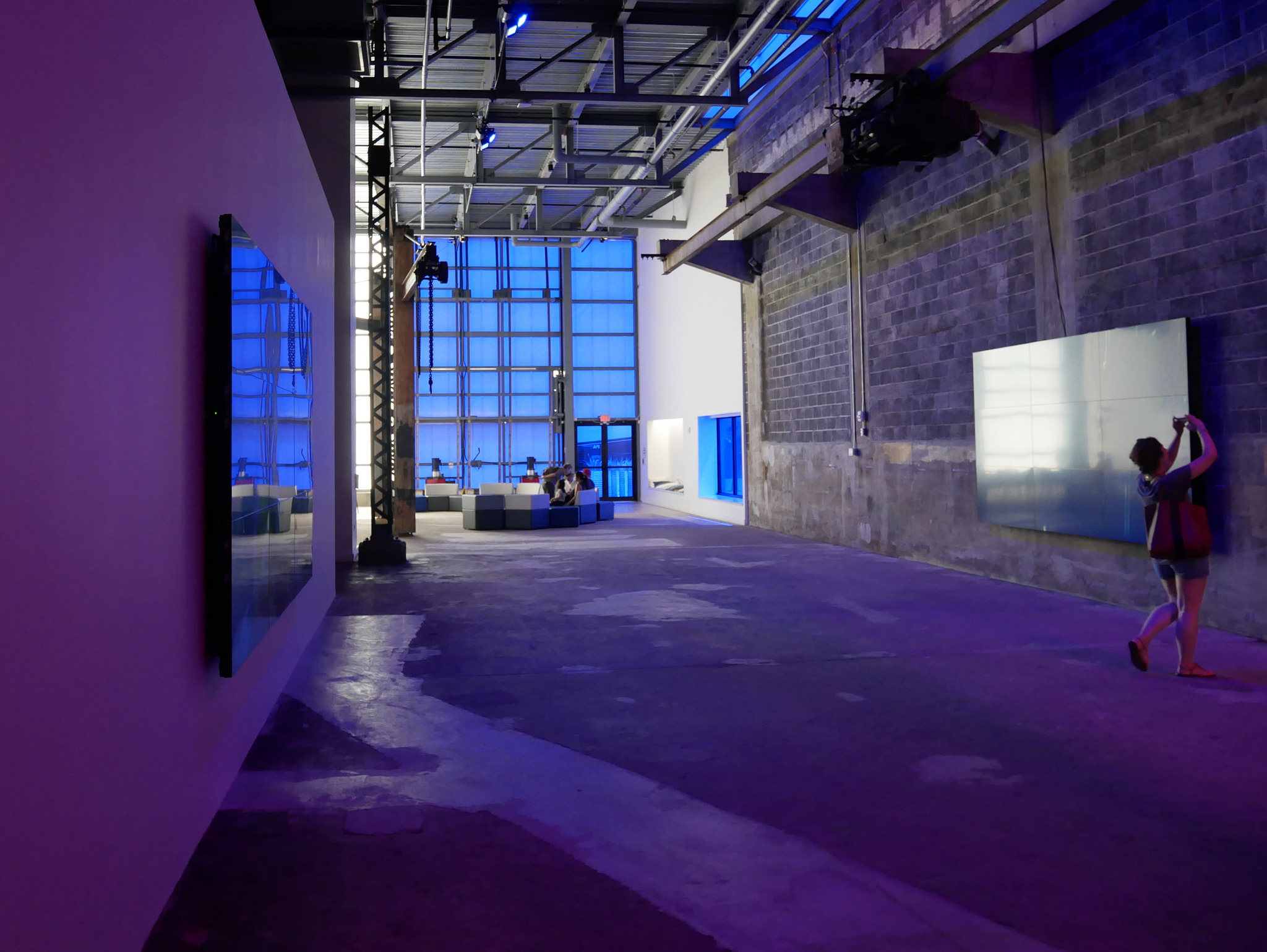