In the Senior Division, Jack Bohman and Lane Bohman, of Eastward Ho!, shot 5-under-par 67 and escaped a two-hole playoff to win their first Father Son tournament. On Tuesday, Brendan Hester and Jack Hester, of Pleasant Valley Country Club, continued their success from last year with a 2-under 70 to emerge with the title.

Brendan Hester and his son Jack Hester are no strangers to the Father Son Tournament or the modified scotch format. In 2020, they shot 2-over 74 and needed a playoff to earn a victory. This year, they ran away from the field, winning comfortably by three strokes.

We put it in play all day, that was the biggest thing, said Jack, 18. I was able to get in the fairway a lot, for him being the better approach player. We had a lot of wedges, a lot of good looks, and a lot of stress-free holes, which is really what helped us through the entire way.

Three teams finished behind the Hesters at 1-over 73. Richard Green and David Cammarata-Green, of Pine Brook Country Club; Keith Burch and Brady Burch, of Crumpin-Fox Club; and Joseph Iaciofano and Joey Iaciofano of TPC Boston. 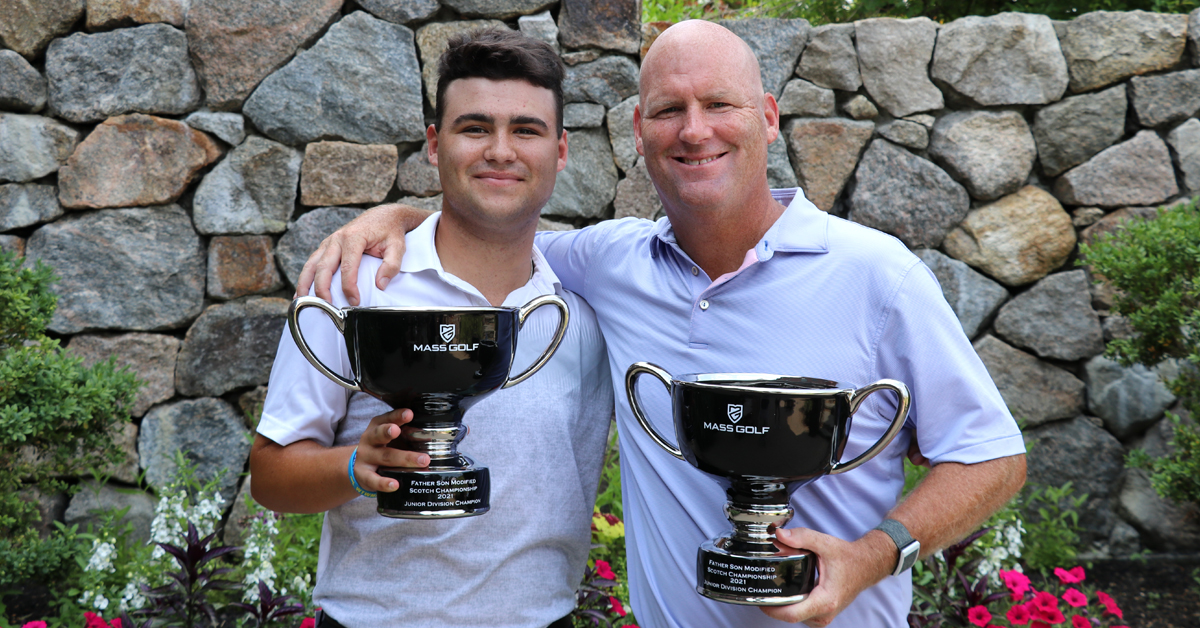 The Hesters finished with six birdies, but they didnt feel like they hit their stride until the back nine.

I was fortunate enough to drive the green on 10, and that was a pretty big turning point because I didnt really hit that great of a drive, and we got a lucky break, Jack said. A two-putt birdie there was nice.

On the 16th, the Hesters were 1-under and trying to hold on to their lead. Brendan had a short putt for par, but his attempt lipped out, and they settled for a bogey. However, they responded with birdies on 17 and 18 to close out their day in style.

I was able to hit an approach into about seven or eight feet on 17, Brendan said. He [Jack] had a downhill, pretty-fast putt, and he just hit it perfect right in the middle. We kind of knew at that point we had at least a couple shot lead, so it made 18 a little bit easier.

This year was the last time Brendan and Jack will be able to compete in the junior division before Jack ages out, so it was certainly sweet to exit with back-to-back victories.

Jack hit a lot of great shots and made it pretty easy on me, Brendan said.

He added with a smile that winning any event with his son will never get old.

No way. Its the coolest thing ever.

On Monday, the finish in the Senior Division came with some dramatics. Jack Bohman andLane Bohman shot 4-under on the front nine and made some big shots late in the round to stay in contention. The duo made eagle on the 14th (481-yards, par-5) and then made birdie on the 16th (363-yards, par-4).

Paired with Steven Tasho, Sr. and Steven Tasho, Jr. of Thorny Lea Golf Club, both groups went shot-for-shot. Despite a double-bogey on the 12th, they rallied to match the Bohmans eagle on 14, then they made a clutch birdie on the 18th to tie things at 5-under-par 67 and force a playoff. 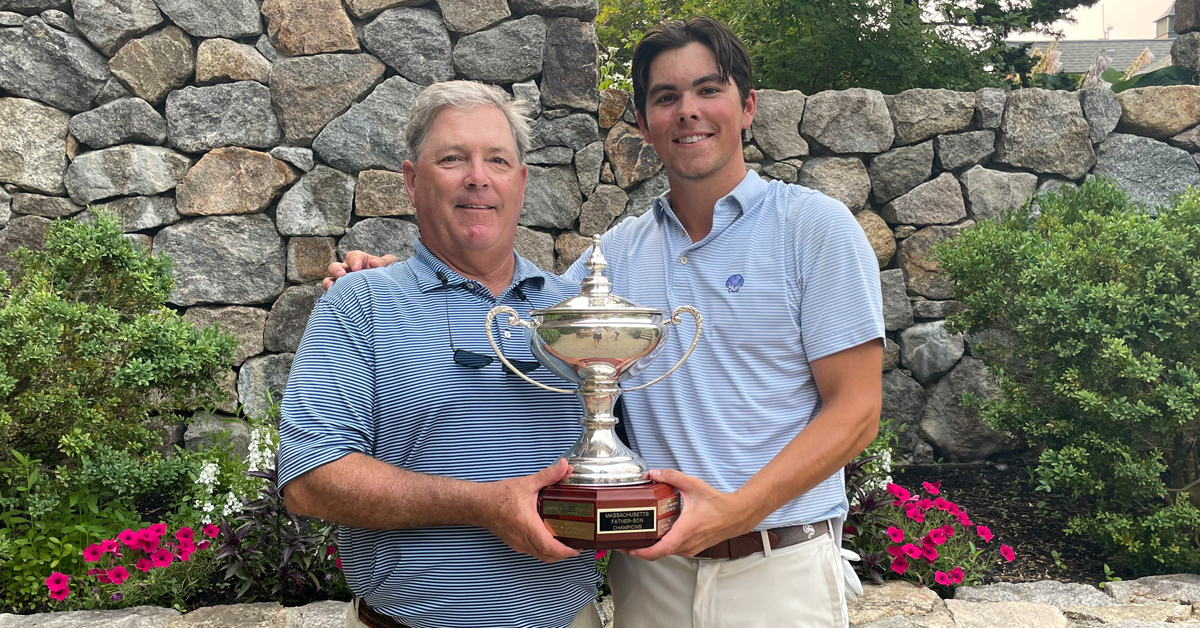 The playoff went just two holes, with the 1st hole (384-yard, par-4) being played twice. The Tashos had a chance to end it with a birdie opportunity the first time through, but their putt lipped out.

The miss opened the door for playing the hole over again, and the Bohmans got in for a par and ultimately grabbed a victory. Jack and Lane worked together to rise above a field that included a total of 124 competitors.

Weve been so close for so many years and we always believed we had a chance, Lane said. We always got ourselves in the hunt, but we hadnt quite been able to make it happen. We showed up with full belief that we could win and with a mindset of believing that something good is going to happen today and we approached every shot like that, which was really exciting. We just believed in ourselves and each other. It felt really great to make it happen.

Jack, 61, has played a lot of golf over the years with Steven Tasho, Sr. and was grateful to be paired with Tasho and his son for the round. We knew that if we hung with them, we were going to be OK, said Jack. It was great because they pushed us and we pushed them. We were lucky to have such a wonderful pairing. Theyre good guys. We had a lot of good laughs.

Like most tournaments in this sort of format, playing to strengths is key. That is exactly how Jack and Lane approached the day to finally capture that elusive first Father Son Modified Scotch crown.

I think weve learned how to communicate with each other, Jack said. When to push, when to pull, its pretty minimal now because we know each others strengths and weaknesses. It was pretty cool. Lane absolutely bombs the ball and the strategy was for me to put my little drive in play for insurance and then Lane rips it. I have a pretty strong short mid-iron game, really steady, so I hit most of the shots into the green and then Lanes putter just caught fire. It was an ideal combination.

Two other pairs also came in under par. Eduardo Cordeiro and Oliver Cordeiro, of Belmont Country Club, shot 4-under 68 to finish one stroke behind the leaders and in solo second place. Mark Chylinksi (Wyndhurst Manor and Club) and Brent Chylinksi (Wahconah Country Club) finished at 1-under 71 in solo third.

BACK IN THE BAY STATE

Finishing in sixth place on Tuesday was the pair of Scott Coteand Ryan Cote, of Country Club of Greenfield, shooting 3-over-par 75. While they didnt crack the top three, Ryan, 17, has only been back competig in Massachusetts for a few weeks since moving to South Carolina back in January.

A former standout at Greenfield High School, Ryn moved down to Pawleys Island, South Carolina, and enrolled at Waccamaw High School where he is continuing to play golf. His father still lives at their house in Greenfield and travels back and forth between the two locations, but getting to get back out on the course in Massachusetts is an opportunity the 17-year-old has relished. 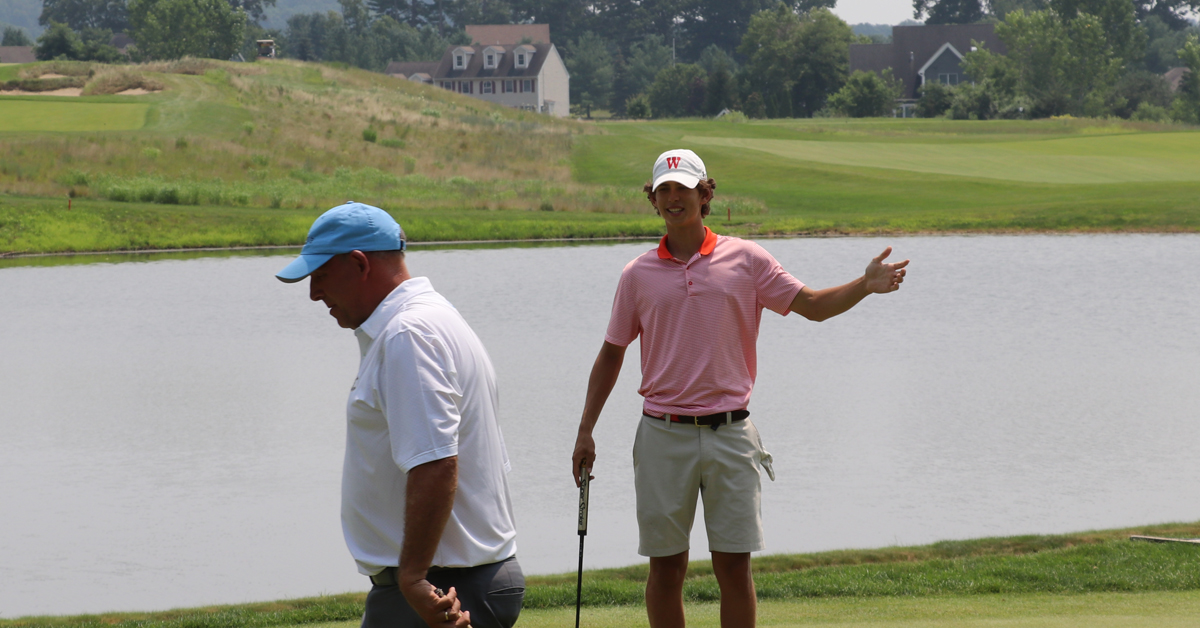 Ryan Cote celebrates his fathers made putt on the 14th hole. (Mass Golf)

I always love coming back, said Ryan, who played in the CC of Greenfield club championship. Its a fun event to play in, and its a lot different coming back and forth [between states]. You have different grass, different kinds of courses, theres water everywhere down there, and the fairways are kind of narrower here.

Getting to return to playing in the Bay State is nice, then also doing so with his dad is another added bonus.

Its tough to not rip each others heads off in this kind of format, Ryan said with a laugh. Its a lot of teamwork, so its fun to have that kind of talk and play off each other.

Come the fall, Ryan will be a senior at Waccamaw and will be eligible to compete in team events with his schools golf team after being forced to sit out this past season due to transfer rules.

Visit MassGolf.org and follow @PlayMassGolf onFacebook,Twitter,InstagramandYouTubefor the latest information on Mass Golf championships and events. To join the conversation, use the hashtag #MassGolf.

Jack Bohman is a real estate associate at Gibson Sotheby's International Realty in Chatham, Massachusetts. You can contact him at508.237.5039 or Jack.Bohman@GibsonSIR.com.