We are pleased to present a guest blog written by Nancy Kueny, an associate at Gibson Sotheby's International Realty in Charlestown, Massachusetts. The article originally appeared in the Charlestown Patriot-Bridge on October 7, 2021. 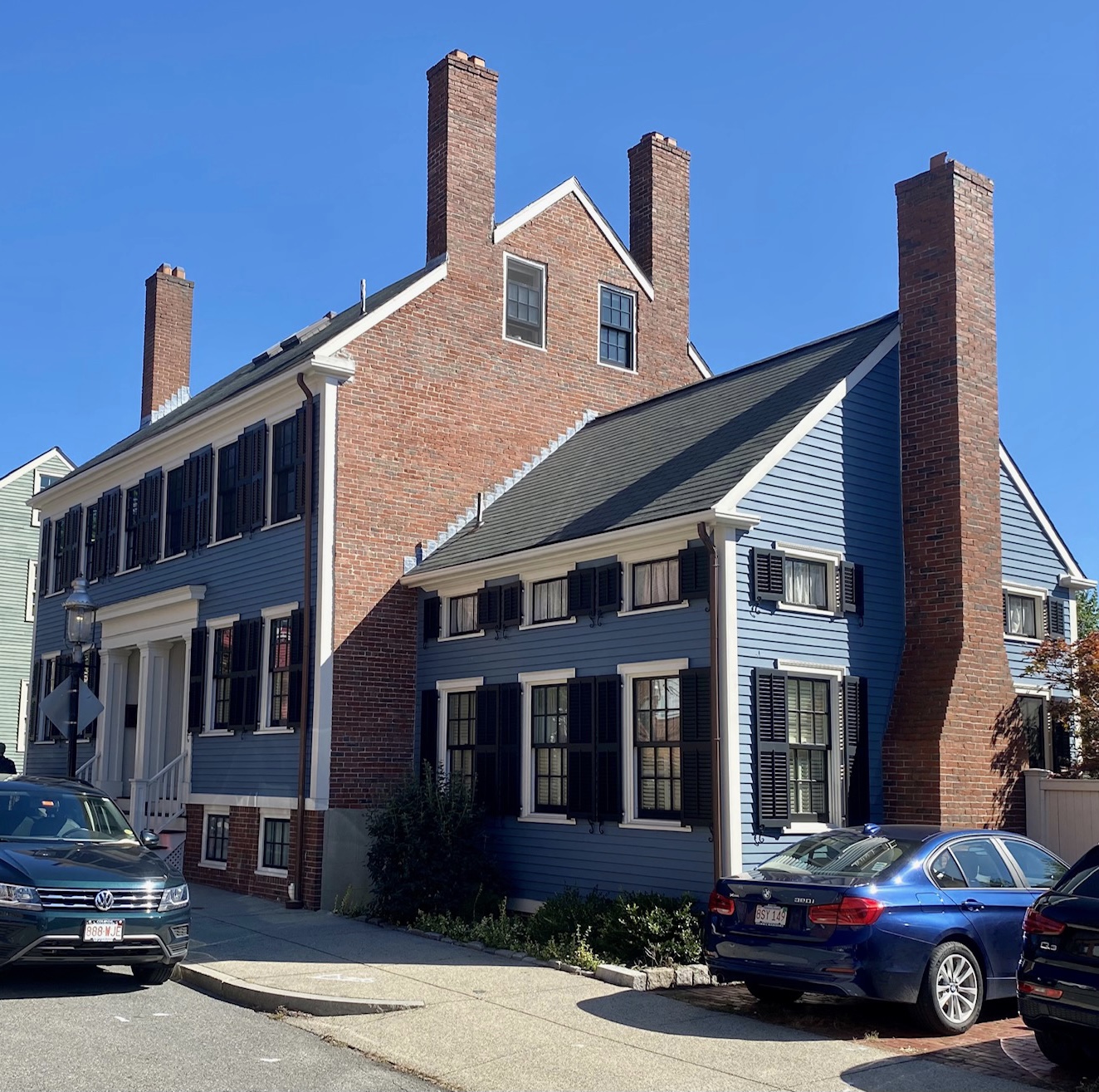 In the 1970s and 80s, a number of buildings located on Warren Street and Main Street as one approached the City Square area were in derelict condition and many had been razed or were slated to be razed by the Boston Redevelopment Authority. One such abandoned building was 44-46 Warren Street. At the time, Jim Adams, the developer responsible for the rejuvenation of the Thompson Triangle, owned the building but decided he was not interested in restoring this one. Initially he wanted to tear this double house down. Instead, he sold it to Allan Kueny (aka my husband) and our partner Tom Howley who planned to move the house to a new location just around the corner on Park Street and authentically restore it. Jim at the time was occupied with the Tontine Cresent project on Main Street.

44-46 Park Street was most likely constructed around 1830-1840. It was comprised of two attached Greek Revival side hall plan homes with two stories and a gabled roof, a very common style in Charlestown. By the 1980s it was a ramshackle structure with no remaining paint, no windows, and an entry covered with plywood that for quite some time featured the enigmatic graffiti ‘Jeffrey Hennesey Has His Priorities’. An 1875 plan of Ward 20 in Boston indicates that 44-46 Warren Street was owned by S.S. Wilson. It also indicates that there was a livery stable to the right at the corner of Henley and Warren, which interestingly must have preceded the garage at 40 Warren Street. Same function but different mode of transportation. 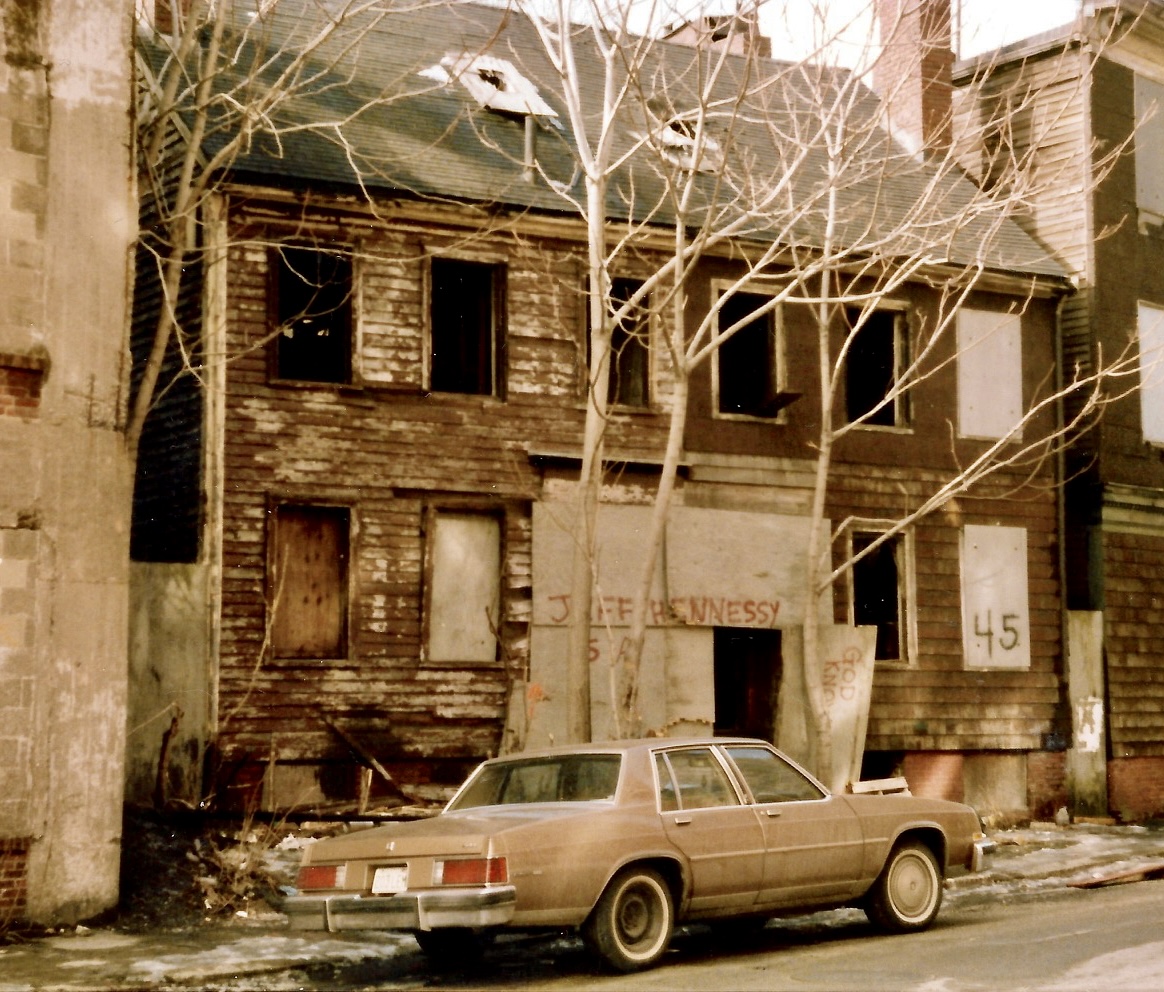 Houses have been moved since the 1700s for various reasons. The process is quite simple and moving a building today is technically similar to the way buildings were moved in earlier centuries. The difference is that today the house rolls down the street on a flatbed truck instead of being pulled along by a team of oxen or horses.

The first step in moving a structure is to place temporary I-beams under the first floor. This is done by punching holes in the foundation to insert the steel beams. The foundation is left behind. The beams take the place of the foundation in terms of supporting the structure. Next, wooden cribbing beams are incrementally and meticulously installed beneath the I-beams as hydraulic house jacks systematically raise the building. Once the building is even with the flatbed it is hydraulically moved onto the truck. Once on the truck the house is carefully moved, generally at a walking pace. 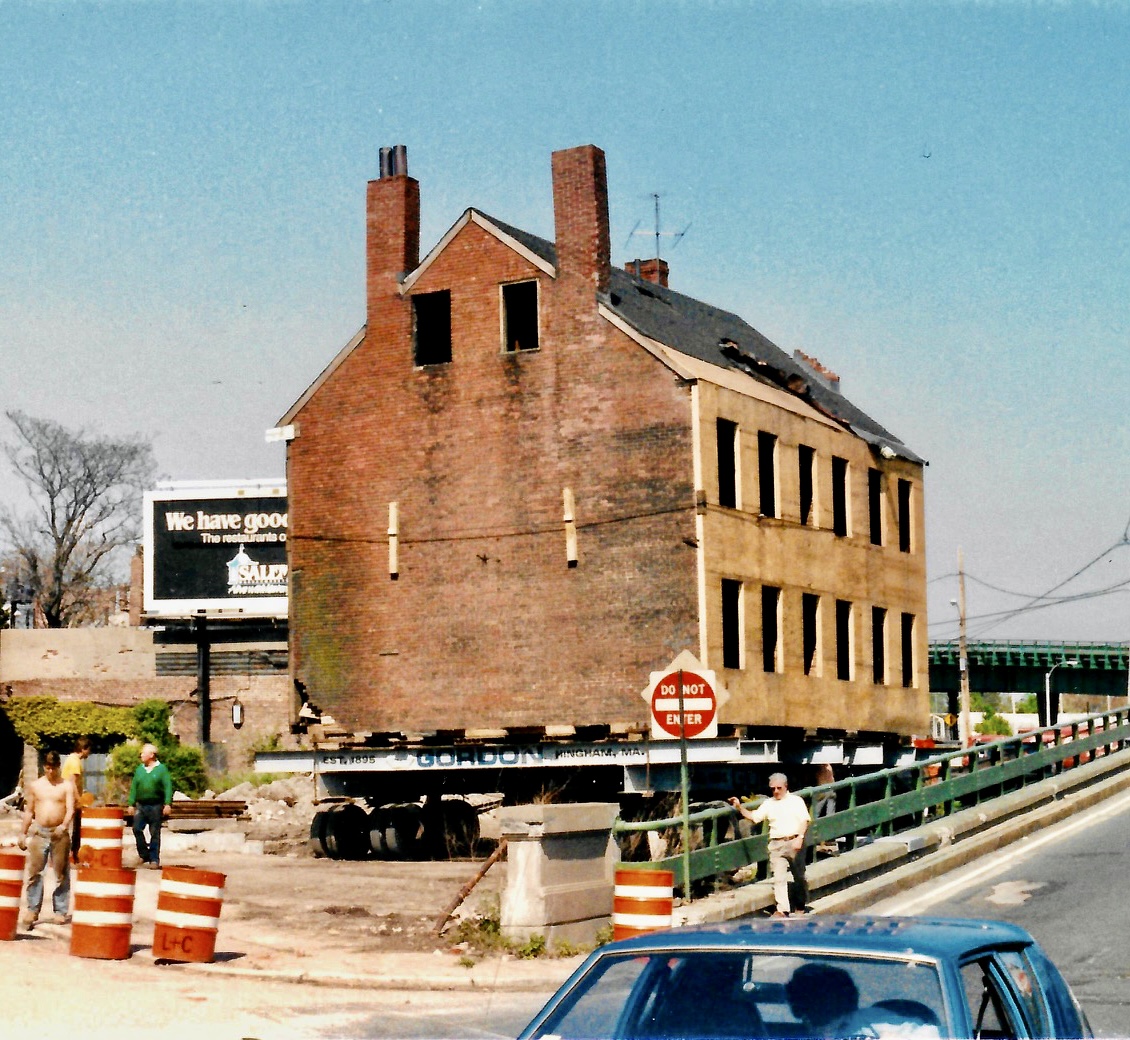 It was quite a sight seeing this building head down Warren Street toward its new location. A large crowd of spectators assembled as it was such a novel event. The move was done by Gordon Building Movers of Hingham who have been moving buildings since 1895. This building was moved in the late 1980s. At that time, the patriarch of the family Don Gordon was in charge. He was fascinating to watch. It’s not every day you see a man directing and cajoling his crew and a Greek Revival building down a city street. The move was seamless. These guys know what they are doing. A number of years later, around 2000, Gordon Building Movers moved a late Georgian (1827) two story center entrance home for us from 81 School Street to 2 Putnam Street, again doing a spectacular job. We subsequently authentically restored this building as well.

Once the house arrived at the new site at 43-45 Park Street, it needed to be matched to a new foundation which at that point was partially constructed. The foundation was then built around the steel beams which were removed and the foundation holes filled. 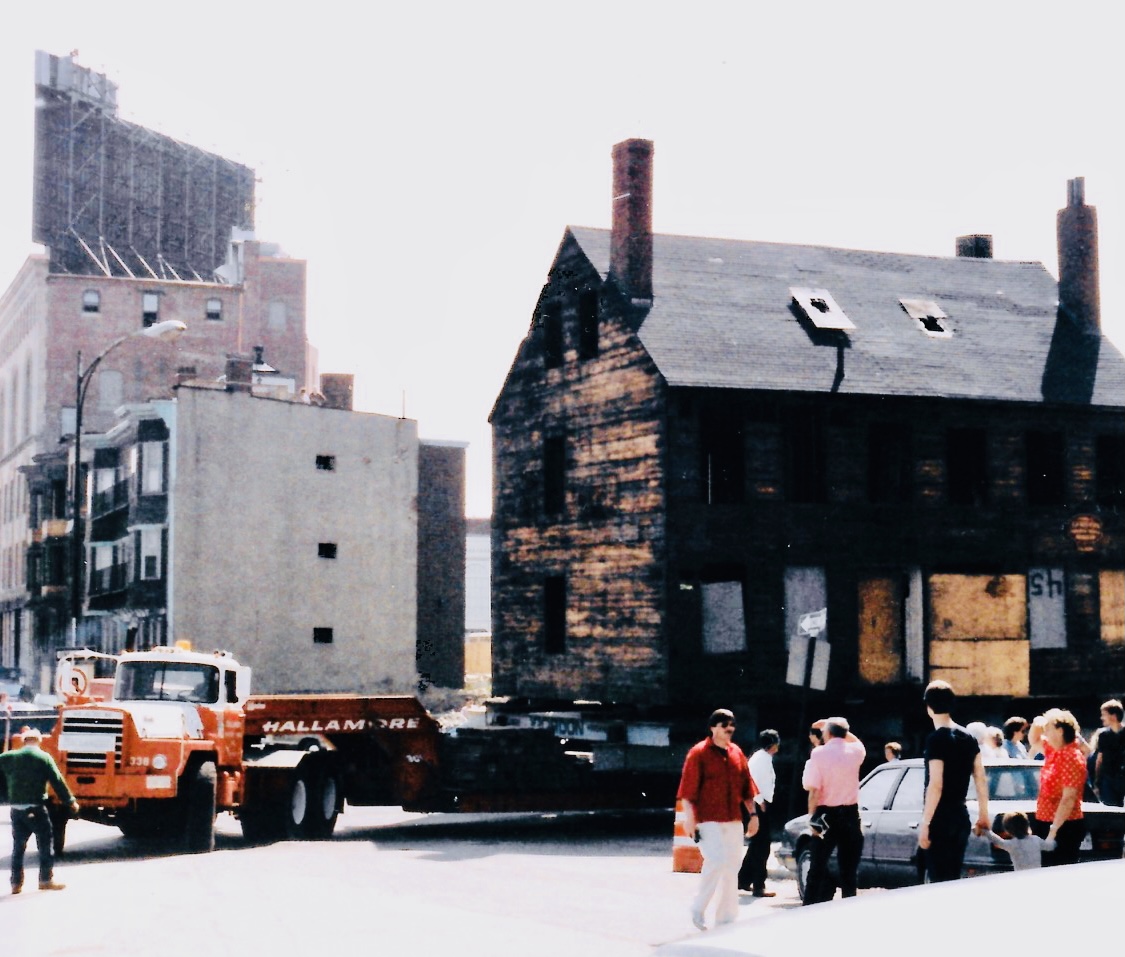 The two homes were ready for restoration. The building had been stripped down to the sheathing and any remaining trim removed prior to the move. It was basically a shell, but the post and beam structure was completely intact and in good condition. Allan was able to keep the original pine flooring, the original bannisters and stairs and the original front doors, but not much else remained. The brick fireplace stacks and chimneys had survived the move and were restored and lined. Reproduction millwork and windows were installed inside and out, and appropriate antique interior doors were sourced for the right side. The entire building was rewired, plumbed, roofed, clapboarded and brought up to code. The homes are a great addition to the existing row of early 19th century restored frame homes along Common Street and Park Street. The first owner of 43 Park on the downhill side subsequently added a one-story addition with a third chimney that enhanced the mass of the building as a whole. The current owners of both homes have added shutters and it is now a lovely shade of blue. Allan and Tom were given Preservation Awards by the Charlestown Preservation Society for this project. I don’t think it’s in the cards for us to move a third house, but it certainly was one of the most interesting and gratifying things that we have ever done. 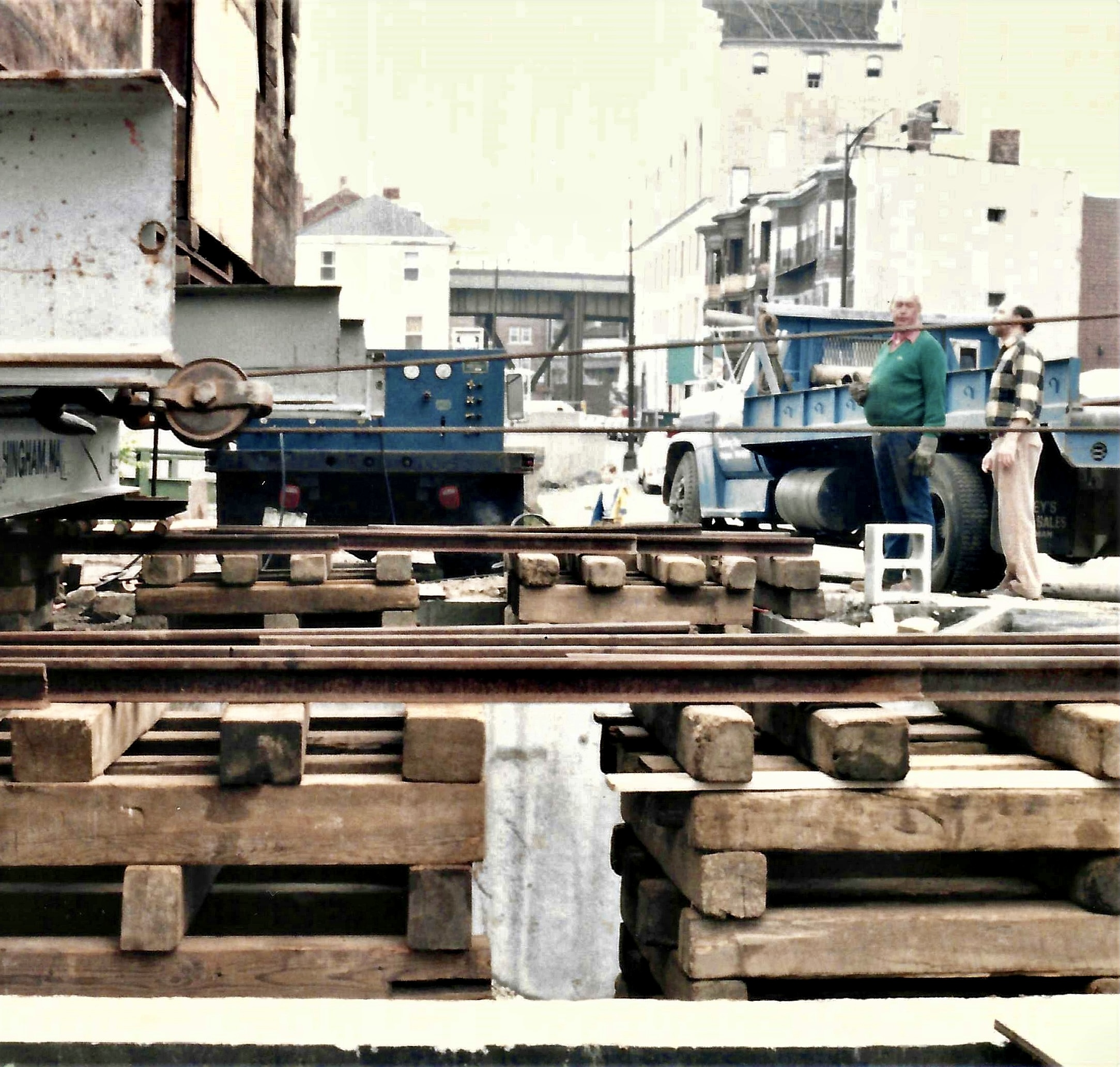