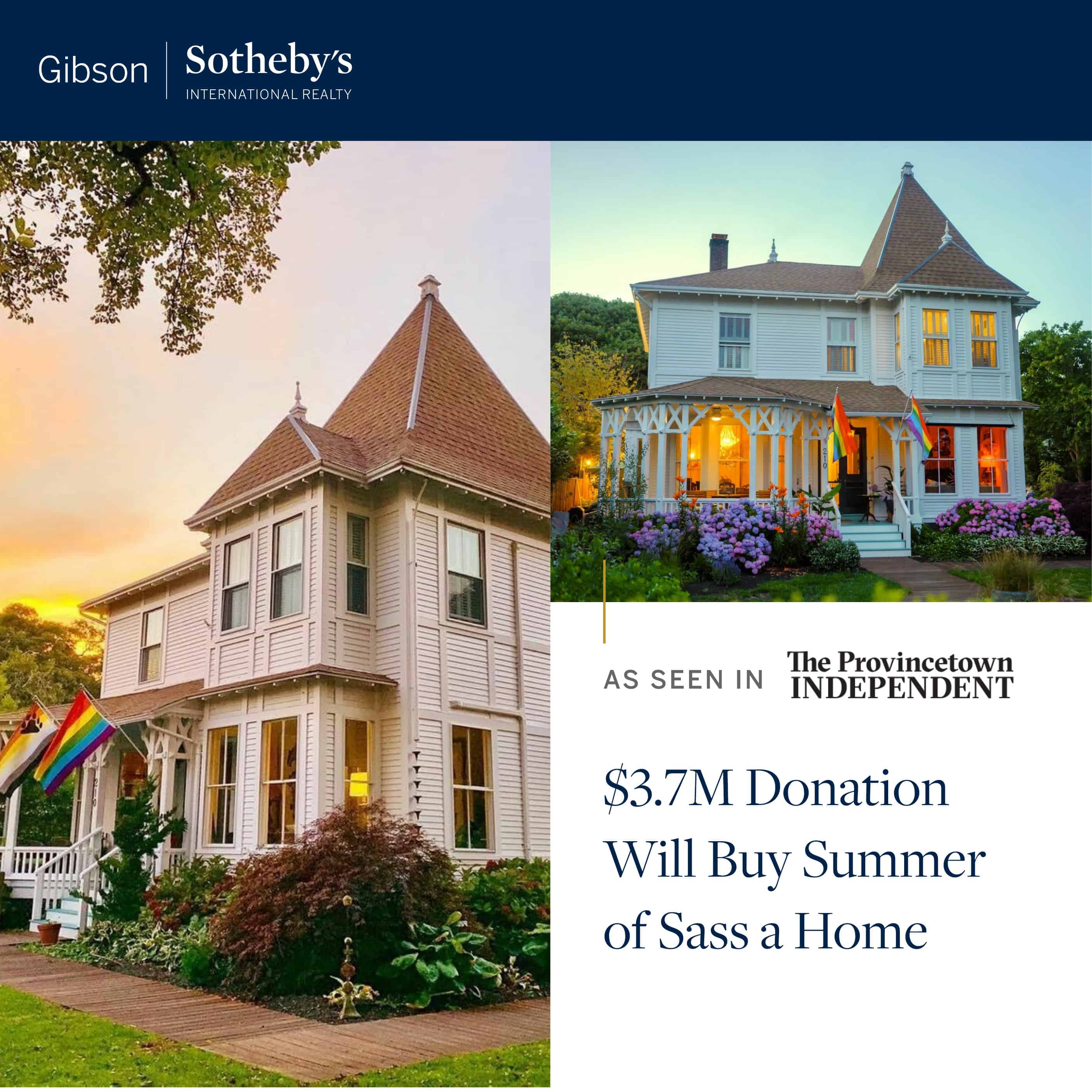 Originally published by the Provincetown Independent on September 7, 2022
By Paul Benson

PROVINCETOWN — The Summer of Sass program brings vulnerable LGBTQ young people who are living in hostile environments to Provincetown, sets them up with secure housing and a job, and lets the 18- to 20-year-olds breathe in a place where the air isn’t thick with disapproval.

Alex Howard, Jessica Fuller, Milo Christy, Kristen Becker, Ethan Jackson, Leon Cronin, and Seraphim Sea at the Summer of Sass fundraiser at the Mary Heaton Vorse house in July 2022. (Photo courtesy Kristen Becker)
The six-year-old nonprofit works with only a handful of young people each year — it has always been limited by the number and capacity of the rental apartments it could secure. In front of a lawn full of supporters who gathered at a fundraiser for Summer of Sass held at the Mary Heaton Vorse house on July 16, founder Kristen Becker announced that the time had come to shift gears. She had already begun looking to buy a house for the program’s young people to stay in.

“I believe my exact words were, ‘There’s all this money around me, and I can’t keep doing this by myself,’ ” said Becker, who has day jobs as a stand-up comic and a tour guide.

A self-described “small business owner and kind-of-starving artist,” Becker said the annual struggle to find housing for participants was threatening the program. “I’m happy to continue doing it,” she told her supporters. “But we need a space.”

Within a week, Becker had a verbal commitment from a donor for $2.5 million for her housing quest. She looked at several properties, including guest houses, a short-term rental house, and a three-family home on Bradford Street.

The three-family was already under contract, it turned out. Becker had previously considered the Stowaway guest house at 210 Bradford St., but it was listed for $3.7 million. The donor — who wants to remain anonymous — offered to raise the donation to that amount if the money was for that property.

The Stowaway is a larger space than Becker had dared to dream of. “The location is so perfect, and there’s room to grow there,” she said. The property went under contract on Tuesday, and Becker is expecting to take occupancy in late October.

There are eight bedrooms at 210 Bradford, plus a living room, a dining room, a large kitchen, a den, and decks and gardens. The abundance of common space is what made the property unique, Becker said.

Seraphim Sea and Ethan Jackson at the future home of Summer of Sass, 210 Bradford St. in Provincetown. (Photo courtesy Kristen Becker)
“We stick to age 18 to 20, because they’re young enough that they can’t drink,” said Becker. “Growing up in the South, the only place you’re allowed to be gay is in a bar. All of your intimacy and connection and affection are learned with booze.”

Becker wants to loosen the links between queer identity and alcohol. “We don’t all have to be broken gays by 35,” she joked. At home in a shared space, “They’re going to entertain each other,” said Becker. There will be family dinners and game nights, she said.

Becker started Summer of Sass shortly after doing a gay comedy tour through the deep South, and many of the first participants arrived via groups she met there, like the Louisiana Trans Advocates and the Piney Woods Voice. Others came from Alabama or small towns in northern states, including Ohio and Massachusetts. About half, including most of her earliest participants, came with the support of parents who wanted their children to see a life outside of their hometowns.

“Jessica Fuller was here only for a summer, went back to Alabama, and became an outspoken advocate for trans rights,” said Becker. “Her father, David Fuller, is a cop. He testified before the Alabama State Senate when they were really going after trans kids and their doctors, saying, ‘Don’t arrest my heroes. They saved my daughter’s life.’ ”

Others have come from more difficult home situations. Seraphim Sea was in the relatively safe city of Austin, but when her mother kicked her out of the house, she was on the edge of homelessness.

Milo Christy, a Sasser from northern Louisiana, met Alex Howard here. Howard had already made his way from Lawrence to Provincetown as a 19-year-old, but he was living with two bunkmates in Stop & Shop’s employee housing and not using his true name at work. The two are now engaged and living in New Orleans.

Ethan Jackson came from Defiance, Ohio almost immediately after turning 18. He found work at a bike shop, but accessing health care was his big achievement last summer. Becker brought Jackson to Outer Cape Health Services to sign up for MassHealth, and he made his own appointments to address a heart condition that had sent him to the emergency room a year earlier.

“MassHealth is amazing,” said Jackson. “I got primary care, because that’s something I did not receive growing up, and from there I took the wheel and made the steps to get my surgery.”

Jackson had Wolff-Parkinson-White syndrome, in which extra electrical pathways inside the heart lead to a racing heartbeat, lightheadedness, and fainting. He had an ablation procedure last September to remove the excess nerve tissue that causes the problem.

Jackson took a job at Canteen that October and now lives in the restaurant’s employee housing. He also runs spotlights at the Crown & Anchor’s drag shows.

“I don’t want to use the word ‘liberating,’ because everyone uses that word — but you don’t feel like you have this target on your back,” said Jackson. He was never physically attacked, Jackson said, but two weeks after he left Defiance, a 14-year-old with a gay flag was beaten up on his school’s bleachers in broad daylight.

“To be able to walk down the street holding hands — it’s like night and day,” said Jackson. “I’m out without even having to tell people, and it’s the kind of freedom that everyone deserves to experience.”

Becker expects to host six or eight young adults next summer, and 12 or 14 the year after that. Her donors agree that Summer of Sass needs a real staff now, and she and two other people will get a salary.

Real estate agent Nathan Butera started helping Becker look for property in May. He said he had agreed to donate to Sass his share of the sales commission on whatever they found.

They looked seriously at a two-family house whose owner had recently died, Butera said, and the three-family house at 262B Bradford. They each could have held six participants, although the Bradford property had year-round tenants who would eventually have been displaced by the young people in Becker’s program.

The short-term rental properties and guest houses they looked at had many more bedrooms, and among them Stowaway had by far the most common space. These options were more expensive than other houses, but none would displace any tenants, and they allowed the organization to grow much faster.

With a million dollars to spend on real estate — Becker’s original estimate of what could be raised — Butera said, “It was going to be more of a baby-step kind of thing.” Down the road, the organization would have to plan to build or find another way to expand, said Butera. “But she had her fundraiser, and she raised more than that. It went from there.”